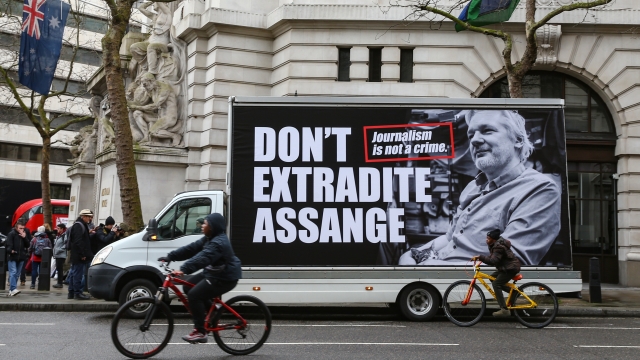 SMS
Wikileaks Founder Julian Assange's Extradition Hearing Has Started
By LeeAnne Lowry
By LeeAnne Lowry
February 24, 2020
His lawyers argue that if he were extradited, Assange would be subject to a politically motivated sentence in the U.S.
SHOW TRANSCRIPT

A hearing to determine whether Wikileaks founder Julian Assange will be extradited to the U.S. began in a British court on Monday.

Last April, U.K. authorities arrested Assange at the Ecuadorian Embassy in London after Ecuador revoked his asylum. The U.K. found him guilty of violating bail conditions and sentenced him to 50 weeks in prison, where he's been awaiting his full extradition hearing.

The U.S. Justice Department initially charged Assange with one count of conspiracy to commit computer hacking. In late May, prosecutors filed an additional 17 charges against Assange under the Espionage Act for allegedly obtaining and publishing classified information. Assange faces a maximum of 175 years in prison if convicted on all charges.

Assange's lawyers argued at Monday's hearing that if he were sent to the U.S., he would be subject to a politically motivated sentence. They pointed out that the Obama administration chose not to take any action against Assange, but that President Donald Trump's administration has reversed that decision.

Assange's lawyers stressed that Assange is a journalist and argued the charges weren't brought "on the basis of new revelations, but because it had become politically expedient and desirable." They also argued that the proposed sentence didn't match similar cases, which only had punishments of 40-60 years.

The legal argument portion of the hearing will last five days. Then in May, there will be several weeks of witness testimony. It could be months or years before the court makes a decision.