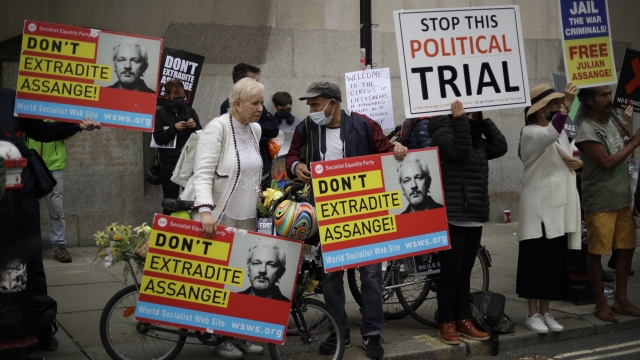 SMS
Julian Assange's Extradition Hearing Resumes After Delay
By Nathan Byrne
By Nathan Byrne
September 7, 2020
It had already been delayed for months due to the coronavirus pandemic.
SHOW TRANSCRIPT

A British judge rejected a request Monday to delay the extradition hearing for WikiLeaks founder Julian Assange. It had already been delayed for months due to the coronavirus pandemic.

Assange is fighting to avoid extradition to the United States, where he's wanted on 18 criminal counts for WikiLeaks’ publication of secret U.S. military documents a decade ago. The charges carry a maximum sentence of 175 years in prison.

The U.S. Department of Justice added a new indictment in June, accusing Assange of recruiting hackers at conferences in Europe and Asia.

Assange’s lawyers call the case a politically motivated abuse of power that will stifle press freedom and put journalists around the world at risk.

The case is expected to run until early October, with the judge taking weeks or even months to consider her verdict. After that, the losing side is likely to appeal.

Additional reporting by Jill Lawless of the Associated Press.