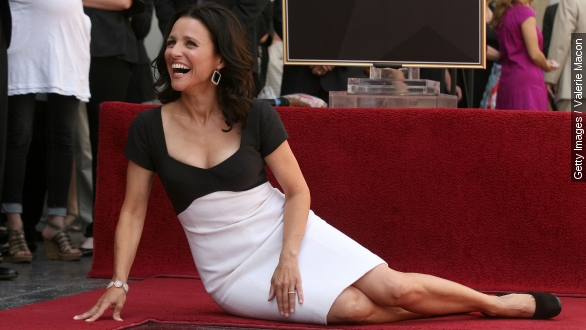 Spell-check is important. And it's probably even more important when someone is getting a big award.

Like a star on the Hollywood Walk of Fame. Just ask Julia Louis-Dreyfus, who revealed on "The Tonight Show Starring Jimmy Fallon" that her name was misspelled on her original star.

"She goes, 'Listen, I gotta tell you, I have some bad news.' And inexplicably, I said to her, 'They spelled my name wrong.' ... Look!" Louis-Dreyfus said.

Now, this all happened back in 2010. And photos from the day show someone tried their best to squeeze in the O that was missing from her last name in time for the ceremony.

The "Veep" actress is able to laugh about the whole thing now, though.

"Just when you think you've got it all, they yank it away!" Louis-Dreyfus joked.

Louis-Dreyfus is in pretty good company when it comes to having her name misspelled.

In 2013, when Anne Hathaway was announced as a nominee for best supporting actress at the Critics' Choice Movie Awards, someone forgot to add the "E" to her first name.

And then she famously ended up winning the award and said in her acceptance speech, "This is a bittersweet moment for me because I have this award, but you spelled my name wrong."

Louis-Dreyfus did tell Jimmy Fallon that she got to keep her misspelled star. Well, it's the least they could do, right?

This video includes images from Getty Images and music by Podington Bear / CC BY NC 3.0.