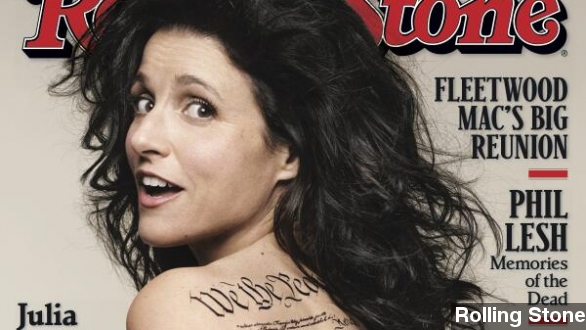 For anyone considering baring it all on a major magazine cover, don't let anyone write anything on you.

Because in the off chance you wrongly put the most famous signature in America's history on one of its most iconic documents, that error is the only thing that anyone will care about the next day.

The actress poses nude as "The First Lady of Comedy" with the U.S. Constitution printed on her back. The big problem? John Hancock's signature is "featured," and Mr. Hancock did not sign the Constitution.

We're guessing the mag thought putting a 53-year-old woman who's on a hit show naked on its cover would be what grabbed people's attention. Instead, the focus is on the major historical flub and media outlets at large are dishing harsh criticism for the error.

The New York Daily News writes, "Rolling Stone’s Constitution cover is in need of an amendment."

And Slate adds, "If your tattoo (permanent or temporary) is about to be on the cover of Rolling Stone, you might want to have a friend proofread it."

But as the LA Times points out, Dreyfus handled the situation like any true Hollywood veteran by "[milking] it for a little extra publicity."

After a little nod to Toronto's infamous Mayor, Dreyfus tweeted this out blaming the signature mix-up on her 'Veep' PR guy on the show. (Via Twitter / OfficialJLD)

So for those of us who could care less which Founding Father's name is printed on Dreyfus' bare backside, Rolling Stone's newest cover is set for release Friday.