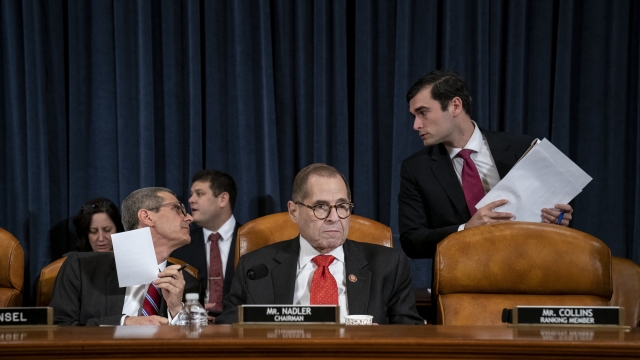 The House Judiciary Committee passed articles of impeachment against President Trump after more than 14 hours worth of debate Thursday.

Articles of impeachment against President Donald Trump are officially heading to the House floor.

Chief Clerk Madeline Strasser: "President Trump thus warrants impeachment and trial, removal from office, and disqualification to hold and enjoy any office of honor, trust, or profit under the United States."

The House Judiciary Committee debated the two articles for more than three hours Wednesday, more than 14 hours Thursday, before passing them Friday morning along party lines.

Republicans were visibly frustrated after the abrupt ending Thursday evening, saying Democrats moved the vote to Friday morning so more people could watch on TV.

During the markup, Democrats offered only a single amendment — changing the president's name from Donald J. Trump to Donald John Trump in the text of the articles.

Republicans, on the other hand, offered up multiple amendments. That included Congressman Jim Jordan moving to get rid of article one — abuse of power — in its entirety, and Congressman Matt Gaetz moving to remove former Vice President Joe Biden's name from the articles and instead add his son Hunter's name, as well as the Ukrainian company he worked for.

An exchange between a Republican Rep. Gaetz and Democratic Rep. Hank Johnson showed just how tense, and sometimes nasty, this process has gotten.

Rep. Gaetz: “It's a little hard to believe that Burisma hired Hunter Biden to resolve their international disputes, when he could not resolve his own dispute with Hertz rental car overly leaving cocaine and crack pipe in the car."

Rep. Johnson: "The pot calling the kettle black is not something that we should do. I don't know what members, if any, have had any problems with substance abuse and busted in a DUI. I don't know, but if I did, I wouldn't raise it against anyone on this committee. I don't think it's proper."

Gaetz was arrested in 2008 for driving under the influence. Both amendments failed.

Republicans also spent their allotted time criticizing the process from start to finish.

Rep. Louie Gohmert: "But the abuses, the obstruction of Congress have come from Congress."

Rep. Debbie Lesko: "I'm supposed to vote on this today, and we have not had one single fact witness here in this committee at all."

Democrats rejected their request for a minority witness day and refuted accusations of unfairness in the deposition process.

Rep. Joe Neguese: "Many minority members were present, and granted equal time to question witnesses brought before the Intelligence Committee the Foreign Affairs Committee and the government oversight committee. some of those members are actually on this committee. So I struggled to understand the objections, in that regard."

Rep. Jamie Raskin: "They don't like the fact that the depositions took place in the basement, where should they have been on the first floor. The second floor will they accept the facts. If we found some other room would that be alright?"

But Republicans say the way Democrats ran this investigation will hurt the body for years to come.

A full house vote to impeach the president is expected early next week.