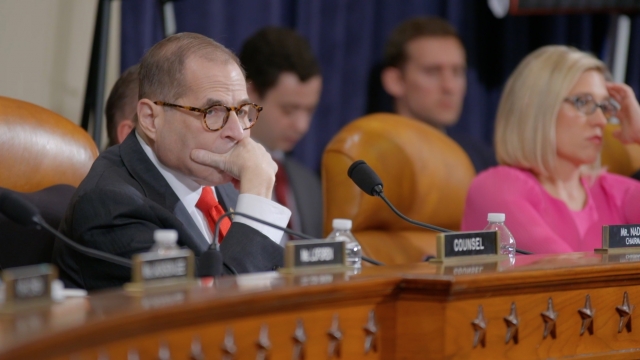 The House of Representatives could vote on articles of impeachment before the end of the year.

Democrats on the House Judiciary Committee now work on Articles of Impeachment.

Congressman Ted Deutch (D-Florida), telling Newsy they're likely to focus on abuse of power and obstruction of Congress.

"I think that pattern of obstruction is something that has to be part of however we go forward," Deutch said.

Democrats want to move on impeachment this year. There are now just two weeks left on Congress' calendar.

The committee could pass articles of impeachment this week.

Judiciary Committee Chairman Jerry Nadler is considering a request by Republicans to hold a hearing to defend the president.

"I inquire and insist mister chairman that you immediately schedule a minority hearing day or tell us why you’re ignoring the rules," GOP Rep. Andy Biggs of Arizona said rasing a point of order during the hearing.

"That is not a proper point of order in today’s hearing. As I’ve told the ranking member several times, I’m considering that request," Nadler responded.

Republicans have accused Democrats of rushing things, but as the minority party in the House, they can't stop it.

"Nobody understands really what the majority is trying to do except to interfere and basically make sure that they believe the President can't win next year if he's impeached," Collins said.

Impeachment is not the only urgent issue on Capitol Hill. The government runs out of money December 20th. One possibility: the politics of impeachment leads to a budget standoff, causing a government shutdown.