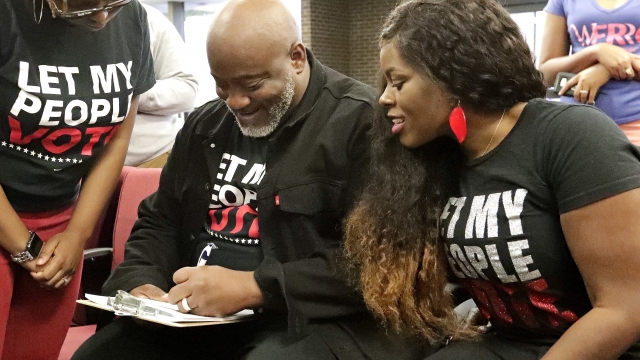 The law, which was signed by Florida Gov. Ron DeSantis in 2019, required felons to pay outstanding court fees before being able to vote.

A federal judge ruled Sunday that a Florida law barring felons from voting until they pay off court fees is unconstitutional.

U.S. District Judge Robert Hinkle said in his opinion that the "pay-to-vote" law made it "difficult" for hundreds of thousands of people to vote and also violated the U.S. ban on poll taxes. The law, which was signed by Florida Gov. Ron DeSantis last year, required felons to pay outstanding court fees before being able to vote.

But for many people, the fees were too expensive. Others were not even able to confirm with the state how much money they owed.

Hinkle said that while a state could make a constitutional argument to bar felons from voting, "whatever might be said of a rationally constructed system, this one falls short in substantial respects."

Critics of the law have also said it disproportionately targeted minorities, but Hinkle denied that.

Reuters reports at least 775,000 Floridian ex-felons have unpaid court costs, and many could become eligible to vote by the November elections.