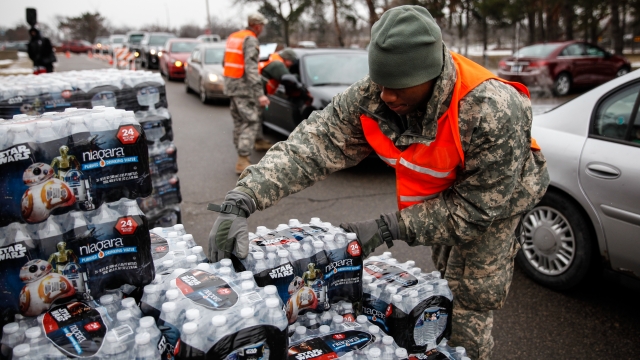 SMS
Judge Requires Bottled Water Be Delivered To Flint Residents
By Katherine Biek
By Katherine Biek
November 11, 2016
Before this order, residents in the Michigan town had to get bottled water at distribution centers.
SHOW TRANSCRIPT

It's been more than two years since city officials switched water sources to save money, which resulted in dangerous levels of lead contaminating Flint's water.

Fast forward to now, and residents are still relying on bottled water because not everyone can trust that their tap water is lead-free.

But the key word in the judge's decision is "deliver."

Up until now, officials have been giving out free water. Residents just had to go to a distribution center to pick it up.

But the plaintiffs argued this method wasn't "completely effective."

So starting now, the judge ordered water be hand-delivered to any resident who doesn't have water filters installed. The Detroit Free Press reports that eligible households will get four cases of bottled water a week.

The city of Flint estimates as many as 30,000 households might have lead or galvanized steel service lines that need to be replaced. As of the end of October, only those at 260 residences had been addressed.