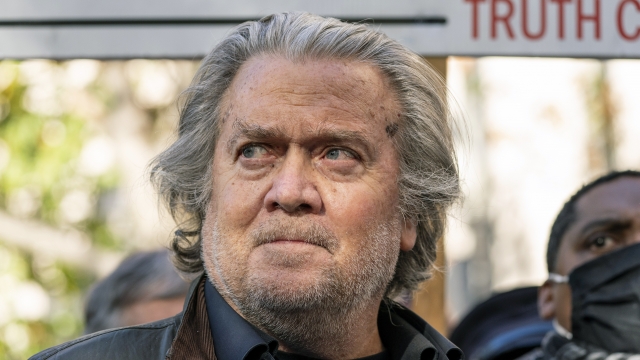 Amid requests for delays and last minute changes of heart, the federal judge in former President Donald Trump’s adviser Steve Bannon’s trial has decided to keep the trial schedule on track.

Jury selection is set to begin Monday in Bannon’s contempt of Congress trial after he asked Judge Carl Nichols to push it back, citing the publicity the Jan. 6 committee raised about Bannon during the hearings.

Nichols denied that request, saying it would be possible to find unbiased jurors in the D.C. area who haven’t been watching the hearings.

The trial will center around Bannon’s refusal to cooperate with the Jan. 6 committee. He ignored a subpoena seeking records and testimony, saying he was protected by executive privilege.

But eight months later, in an apparent last-ditch effort to avoid a trial, Bannon told the committee last week he's willing to testify after the former president waived the privilege claim.

"I would say, before we engage Mr. Bannon at all, he would have to comply with that subpoena," Thompson said. "That has not happened yet."

The committee declined to hear from him on such short notice, saying he needed to produce documents first and instead proceeding with the planned hearing, looking into the connection between the president and far-right groups.

While Bannon hasn't appeared before the committee, his involvement leading up to the Jan. 6 insurrection was scrutinized in that hearing.

"The president spoke to Steve Bannon, his close adviser, at least twice on Jan. 5," Murphy said. "The first conversation lasted 11 minutes. Listen to what Mr.Bannon said that day after the first call he had with the president."

The committee has also investigated his involvement in an apparent pressure campaign by state lawmakers.

Each count for Bannon carries at least 30 days in jail, but as long as one year.

The Jan. 6 committee is also looking into who is paying legal fees for those asked to appear before the committee. According to the Associated Press, the former president has paid nearly $5 million in legal expenses to more than 30 different firms since the insurrection, including a $50,000 payment to a law firm where one of Bannon’s lawyers is a partner.