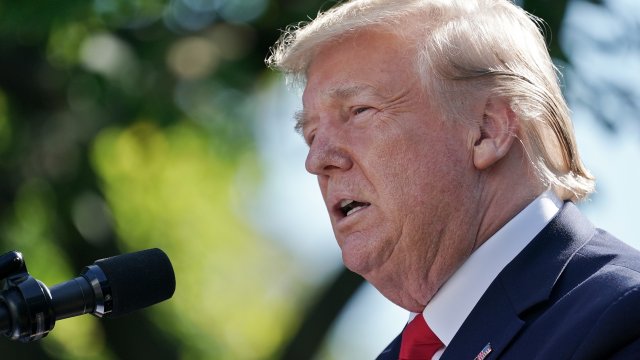 SMS
Judge Rejects Democrats' Request To Speed Up Trump Tax Return Suit
By Briana Koeneman
By Briana Koeneman
August 30, 2019
U.S. District Judge Trevor McFadden said in his ruling there are "only a narrow set of cases that must skip to the front of the line."
SHOW TRANSCRIPT

A federal judge has denied a request from House Democrats to speed up a lawsuit seeking President Donald Trump's tax returns.

On Thursday, U.S. District Judge Trevor McFadden said in his ruling there are "only a narrow set of cases that must skip to the front of the line." And the House Ways and Means Committee failed to prove its lawsuit is one of them.

He added the case presents "weighty constitutional issues and political ramifications" and, therefore, shouldn't be rushed.

The House committee filed the suit in July against the Treasury Department, the IRS, Treasury Secretary Steven Mnuchin and IRS Commissioner Charles Rettig.

It seeks President Trump's personal and business tax returns from the last six years for legislative purposes. The committee says the Treasury Department and Rettig failed to hand over the files and comply with subpoenas.

The suit is just one of many efforts seeking access to the president's tax returns. The House Oversight Committee, House Intelligence Committee and House Financial Services Committee are also trying to obtain his records.