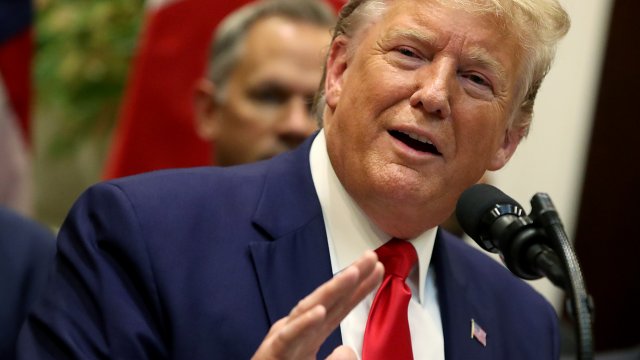 President Trump's battles over his impeachment and tax returns are both escalating this week. Monday, the 2nd Circuit Court of Appeals granted the president a temporary stay after a federal judge issued a 75-page ruling forcing the president to turn over his tax returns.

Judge Victor Marrero said the president is not immune from criminal investigation. The Manhattan District Attorney wants eight years of tax returns from the president and his company as part of an investigation relating to so-called hush money payments to Stormy Daniels. President Trump denies wrongdoing, though his former personal lawyer Michael Cohen is serving a three-year prison term in connection to the case.

The president's legal team argued he has temporary immunity while in office. It's the same principle Robert Mueller cited as his basis for deciding not to come to a conclusion in his report on allegations of obstruction of justice. Judge Marrero wrote  this theory is "not warranted" and using constitutional immunity to "shield the President from judicial process would constitute an overreach of executive power."

The president responded on Twitter, saying in part, "Democrats have failed on all fronts, so now they are pushing local New York City and State prosecutors to go get President Trump."

All of this comes as Democrats here in Washington are trying to keep up momentum on their impeachment inquiry. House Democrats have added to their list of subpoenas, demanding information from both the Pentagon and the Office of Management and Budget relating to the president's decision to temporarily withhold military funds from Ukraine.

A second whistleblower, who works in the intelligence community, has come forward with information on the president's actions in Ukraine.

There are also five expected impeachment depositions this week, including EU Ambassador Gordon Sondland, a central figure in recently released text messages regarding these funds; and former Ambassador to Ukraine Marie Yavonovitch, who is said to have been fired for blocking efforts to pressure Ukraine to investigate former Vice President Joe Biden and his son.