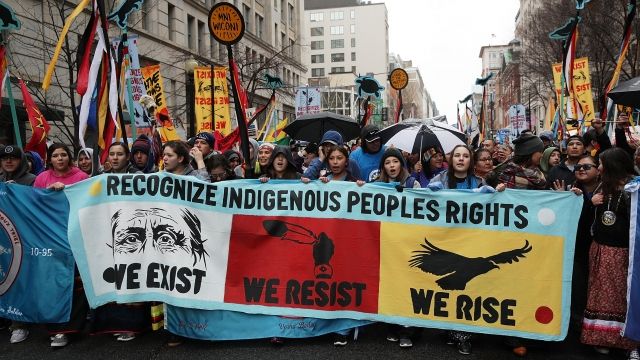 A federal judge ruled parts of the environmental analysis conducted by the U.S. Army Corps of Engineers need to be done again.

U.S. District Judge James Boasberg ruled parts of the environmental analysis conducted by the U.S. Army Corps of Engineers weren't good enough — so the agency has to redo them.

He wrote that although the analysis complied with the National Environmental Policy Act in many areas, the Corps didn't totally consider how an oil spill could affect things like fishing and hunting.

He also ruled the Corps didn't adequately consider how controversial the pipeline's effects would be.

#NoDAPL Activists Put Up A Tipi At Trump D.C. Hotel

It was part of the Native Nations Rise march in Washington.

The Standing Rock Sioux Tribe and other communities argue a pipeline leak could contaminate clean water.

The DAPL crosses several waterways and runs under Lake Oahe — the tribe's primary water supply. The pipeline has leaked at least a few times this year.

Protests over the crude oil line attracted international attention when activists camped out for months — even in harsh winter weather — to halt construction.

The judge hasn't said whether the pipeline will have to stop operating while the Army Corps conducts another analysis. Still, a spokesperson for the Standing Rock Tribe called the decision a "significant victory."