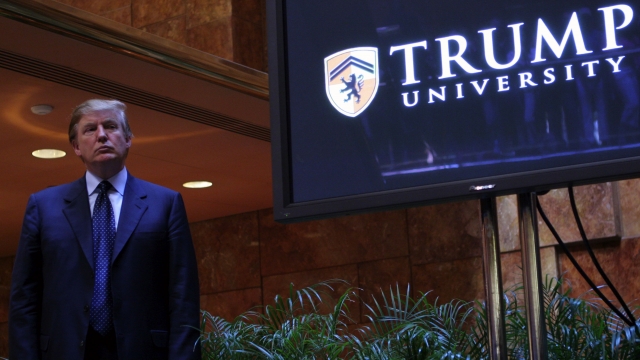 We'll soon get a better idea of how Donald Trump's now closed Trump University was run.

A California judged ruled Friday that certain internal company documents be released, according to The Washington Post.

The paper had requested the release of four Trump University playbooks, which are said to include detailed information about the company's operations and marketing strategy.

Trump's attorney argued against their release because they would expose trade secrets as well as damage the company should it resume operations.

Trump faces two class-action lawsuits as well as a $40 million lawsuit from New York's attorney general regarding Trump University. The lawsuits claim Trump University was a scam, misleading consumers to pay tens of thousands of dollars to get real estate secrets from "professors" Trump "hand-picked."

"There are people that borrowed $36,000 to go to Trump University, and they're suing him now. Thirty-six thousand dollars to go to a university that's a fake school. And you know what they got? They got to take a picture with a cardboard cutout of Donald Trump," Sen. Marco Rubio said during a Republican presidential debate in February.

The lawsuits have been popular attack topics for Trump's opponents. But Trump says the people who are suing him gave Trump University good reviews and are just looking to make some money.

U.S. District Court Judge Gonzalo Curiel agreed with The Washington Post's claim that the documents are of public interest since Trump is running for president.

The judge said in his order, which Politico published online, that some Trump University documents, including the 2010 Playbook, have already been published online. The information in the other playbooks is similar. He also agreed with a previous judge that the information is "very routine" and not trade secrets.

Trump explained his side of the story during his rally in San Diego on Friday. While doing so, he called Curiel "hostile" and said the judge should recuse himself because he was nominated by President Obama. Trump also said he believes Curiel is Mexican but then said, "I think that's fine."

"Judge Curiel should be ashamed of himself. I think it's a disgrace that he's doing this, and I look forward to going before a jury, not this judge," Trump told the crowd.

Curiel was born in Indiana and has had a 37-year legal career.

The records, which The Washington Post said are about 1,000 pages, are to be released by Thursday.