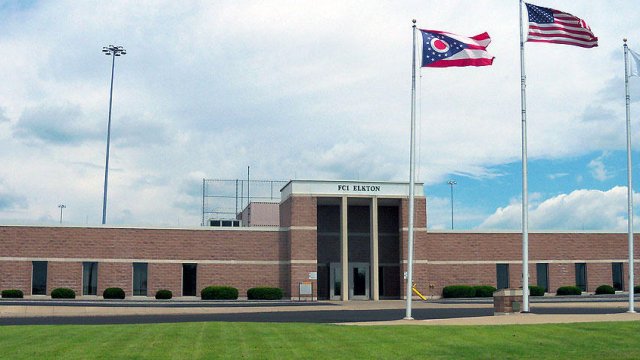 SMS
Judge Orders Release Of Nearly 800 At-Risk Ohio Federal Prisoners
By Jamal Andress
By Jamal Andress
April 27, 2020
This is the first major order from a judge to release federal prisoners en masse, but an appeal is expected.
SHOW TRANSCRIPT

That's why a federal judge ordered the release or transfer of hundreds of prisoners from the facility, marking the first major ruling to release federal prisoners en masse in the country.

CAREY: "Every day counts, and this is very much a life or death situation for those who are incarcerated in a place like Elkton."

David Carey brought a lawsuit on behalf of inmates being held at Elkton, claiming that holding medically vulnerable or elderly inmates in this facility during a coronavirus outbreak is cruel and unusual punishment.

CAREY: "We saw that through some of the studies that have been done that, for example, people with a serious cardiovascular condition could face a case fatality rate as high as 7-10% if they contract COVID-19. And leaving them in an environment where it's simply not possible to keep their distance, and thus keep themselves safe, is cruel and unusual."

A federal judge agreed, citing the Bureau of Prisons' "inability to stop the spread of the virus" and the "paltry number of tests" available to the federal prison facility.

In late March, Attorney General William Barr directed the Bureau of Prisons, or BOP, to expand the use of home confinement to protect federal inmates from the spread of the coronavirus. Since then, the BOP says a little over 1,400 inmates have been moved out of federal facilities to serve their time at home.

But despite Barr's order, the BOP opposed the release of the Elkton federal prisoners, citing a risk to public safety, and, according to Carey, has plans to appeal the judge's decision. In an email to Newsy, the BOP said it is "reviewing the opinion and assessing next steps."

CAREY: "If you are arguing that moving people out of prison is dangerous, that is an argument against moving anyone out of prison at any time anywhere. It's speculative. … Constitutional rights do not stop at the prison walls. People who are living within a prison are still entitled to a degree of safety, and leaving them in a prison to die from an infectious disease is an unacceptable state of affairs."

Similar cases like this have been rejected in Illinois and Louisiana, but Carey is hoping this case can serve as a precedent to get more at-risk inmates released.

As for the federal prisoners at Elkton, BOP staff and U.S. attorneys have until May 6 to determine who will be moved or released and how — whether it be compassionate release, parole, community supervision or transfer furlough.

According to the BOP's website, more than 750 federal inmates and 300 BOP staff have tested positive for COVID-19.