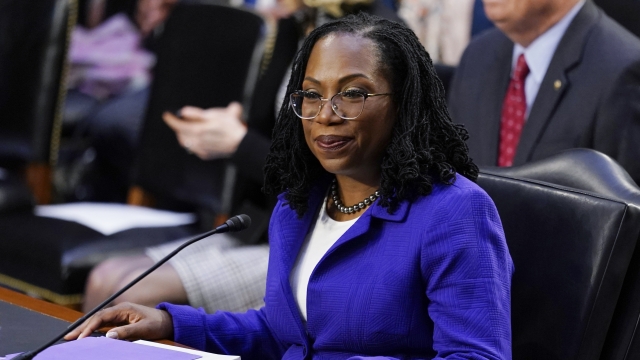 This is the day Judge Ketanji Brown Jackson has spent her career preparing for: Day one of a historic Supreme Court confirmation hearing. Judge Jackson would be the first Black female Supreme Court Justice.

She's been confirmed by the Senate three times before.

Both Democratic and Republican senators agreed on her qualifications, though she’d be the first former public defender on the bench in decades.

Jackson's husband appeared to wipe away tears as she spoke to their daughters.

"Girls, I know it has not been easy as I've tried to manage the challenges of juggling my career and motherhood," she said. "And I fully admit that I did not always get the balance right. But I hope that you've seen that with hard work, determination and love, it can be done."

Before the full Senate can vote on her nomination, she has to first make it out of this Senate committee. Senators will question her over the next two days.

"Let's make a few things clear: Judge Jackson is no judicial activist. She is not a puppet of the so-called radical left, " Sen. Patrick Leahy said.

"What concerns me — and I've been very candid about this — is that in every case in each of these 7, Judge Jackson handed down a lenient sentence that was below what the federal guidelines recommended and below what prosecutors requested," Sen. Hawley said.

"Some of my Republican colleagues and public figures have attempted to undermine your qualifications through their pejorative use of the term 'affirmative action,'" Sen. Mazie Hirono said. "Let me be clear: Your nomination is about not about filling a quota. It is about time."

The White House is hoping to have its nominee confirmed before Easter.