Judge Kavanaugh Gets Prepped For Hearing By Longtime Friend 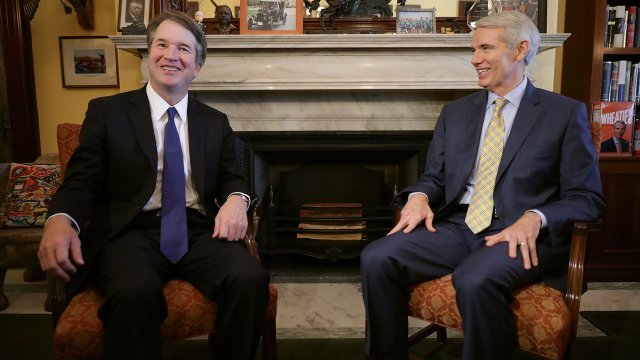 In less than one week, Supreme Court nominee Brett Kavanaugh will sit before the Senate Judiciary Committee for his confirmation hearing. All 21 members, 11 Republicans and 10 Democrats, will get a chance to grill him. Some will probably hit him harder than others. But according to one friend, he'll be ready.

Republican Senator Rob Portman, an old friend and one-time colleague, is prepping Kavanaugh for what could be a contentious few days. Portman says he's up for the challenge. "He'll do very well in the hearings. He's smart, he's capable," Portman said. "He'll be able to answer tough questions about legal issues. He's a humble guy so he's nervous in the sense that it takes a lot to be a Supreme Court justice. You're under the spotlight but he's ready for it."

Kavanaugh has been meeting with members of Congress since his nomination on July 9th. Republicans control the Senate and therefore could pass Kavanaugh's nomination with a party line vote.

But GOP Sens. Lisa Murkowski and Susan Collins have expressed concerns over the judge's stance on the landmark abortion case Roe v. Wade. Kavanaugh told Collins in a meeting last week the case was settled law.

"There are people on both sides of that issue. It's really an issue that splits our country in a fundamental way. His view on supreme court precedent is pretty well established. He quite literally wrote the book on it," said Portman. "He's gonna look at every case as it comes up and take precedent."

Portman says he expects Democrats to spend time on that issue as well as on process. Health care and NSA surveillance are also expected to be big topics. Hearings begin Tuesday and are expected to last through Thursday afternoon.