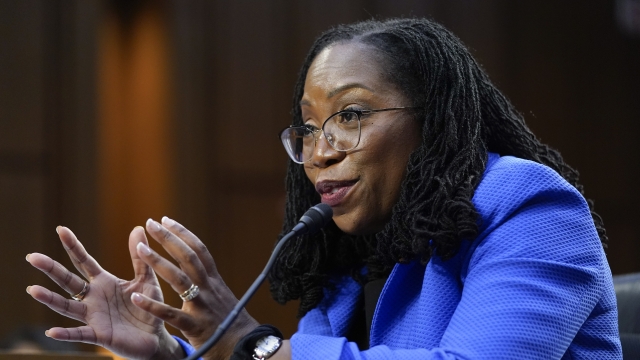 On the third day of her confirmation hearings for the United States Supreme Court, Judge Ketanji Brown Jackson sat for a second day of questioning from senators on the Judiciary Committee.

This comes after close to 13 hours of questions from the committee yesterday.

Many of the same themes were re-visited.

Republican Lindsey Graham again went back and forth with Judge Jackson over her approach to sentencing child pornography offenders.

JUDGE KETANJI BROWN JACKSON: Senator, with respect to the computer, one of the most effective deterrents is one that I imposed in every case and that judges around the country impose in every case, which is substantial, substantial supervision.

SEN. LINDSEY GRAHAM: Wait. You think it is a bigger deterrent to take somebody who is on a computer looking at sexual images of children in the most disgusting way — is to supervise their computer habits versus putting them in jail?

JACKSON: No, Senator. I didn't say "versus."

GRAHAM: That's exactly what you said.

Democratic Committee Chairman Dick Durbin Wednesday accused Republicans on the committee of approaching the hearings as "an opportunity to showcase talking points for the November election."

COMMITTEE CHAIRMAN DICK DURBIN: Your nomination yesterday turned out to be a testing ground for conspiracy theories and culture war theories. The more bizarre the charges against you and your family, the more I understand the social media score board lit up.

Republican Thom Tillis of North Carolina then read from an opinion Judge Jackson had written at the start of COVID. The senator alleged Jackson had advocated sending inmates in D.C. prisons to home confinement during the pandemic. Judge Jackson said the senator's reading of her case was incomplete.

SEN. THOM TILLIS: How can I not read this to say: Perhaps they should be released irrespective of the crime for which they have been charged?

JACKSON: Senator, if you read two more sentences down, that is precisely what I focus on. This a case — United States v. Wiggins — where I was setting up my analysis as to why I would not be releasing Mr. Wiggins.

There were several fiery moments Wednesday when Sen. Ted Cruz charged Jackson with being evasive.

Judge Jackson and committee Democrats said the Texas Republican wasn't giving her a chance to respond.

SEN. TED CRUZ: I asked her why she sentenced Chazin to 28 months, when comparable defendants — in her own words — were sentenced to substantially higher and she said she was not going to answer.

JACKSON: Senator, I didn't say I'm not going to answer.

The second day of questions had gentler moments too, with Judge Jackson emotionally describing her upbringing and the historic nature of her confirmation.

"What my being here is about, at some level, is about the progress we've made in this country in a very short period of time, I would say," Jackson said. "Seems like a long time, but in one generation we've gone from the reality of my parents upbringing to the reality of mine. And I do consider myself, having been born in 1970, to be the first generation to benefit from the civil rights movement from the legacy of all of the work of so many people."