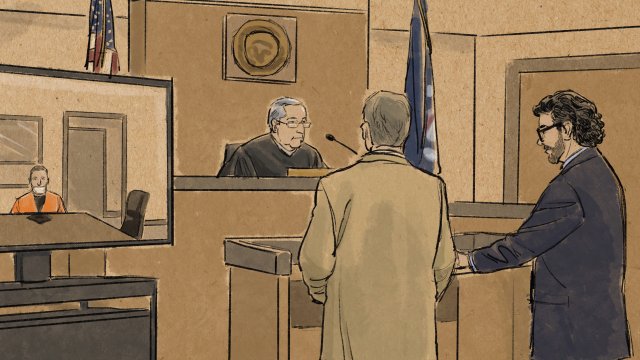 The Hennepin County judge warned more comments from local and state officials on guilt or innocence could endanger everyone's right to a fair trial.

Appearing before a judge in Minnesota, the four officers involved in the killing of George Floyd were told the case might be moved out of Minneapolis.

According to people inside the courtroom, Judge Peter Cahill stopped short of issuing a gag order on the lawyers.

But he warned that more comments from local and state officials on guilt or innocence endanger everyone's right to a fair trial.

The Minneapolis mayor and police chief and Minnesota's governor have all called the killing of George Floyd a murder and have leveled other criticisms at the officers involved. Cahill hasn't taken any action to move the case just yet.

In his second pretrial hearing, Derek Chauvin, the officer seen kneeling on Floyd’s neck, appeared via video conference, while the other three officers appeared in person.

Former officers, J. Alexander Keung, Thomas Lane and Tou Thao are all charged with aiding and abetting both murder and manslaughter. Keung and Lane are out on bond, while Thao and Chauvin remain behind bars.

Lawyers for Lane and Keung have both blamed Floyd's death on Chauvin, saying the rookie officers were just following his lead.

"You've got a 20-year cop in the front and my guy back there with four days [asking], 'Should we roll him over?' And he says, 'No, we'll wait for the ambulance', twice. I don't know what you're supposed to do as a cop," Lane's attorney, Earl Gray, said.

Lane's attorney says he plans to ask for the charges to be dropped because Lane asked on multiple occasions to turn Floyd on his side and gave him CPR after the incident.

The next hearing for this case is scheduled for Sept. 11, while a tentative trial date has been set for March 8.