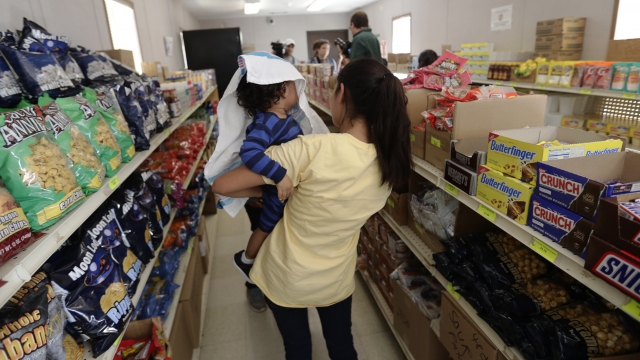 SMS
ICE Has New Deadline To Release Children, Possibly Separating Families
By Austin Landis
By Austin Landis
July 17, 2020
A federal judge extended the deadline for ICE to release children from its centers to July 27. Her order cites concern about COVID-19.

U.S. Immigration and Customs Enforcement now has more time to decide whether it’ll release dozens of children in its custody.

U.S. District Judge Dolly Gee extended a deadline to release minors in ICE custody at all three of its family detention facilities. In a June ruling, Judge Gee said detention centers were “on fire,” citing cases of COVID-19 inside and among staff.

But as the new deadline of July 27 approaches, it means some children may be separated from their parents, who would stay in detention.

“Mothers are still waiting. Is it today? The day ICE asks me to separate from my child?” said Stephanie Alvarez-Jones, who represents families inside the family detention center in Dilley, Texas.

ICE may let parents decide to either allow their children to be released to a sponsor or have them stay inside together, where they risk exposure to COVID-19.

Alvarez-Jones says the decision is made more difficult by unanswered questions, such as when families would be reunited if separated. She says ICE hasn't told her or her colleagues when reunification might happen.

Under the Flores Agreement, immigrant children can only be detained in a facility that meets certain standards. Flores also sets a limit on their detention at 20 days.

Advocates say releasing children by the judge’s deadline, but without their parents, amounts to another case of family separation by the agency.

“Parents have said their children still cry and say, 'Please tell me you’re not going to separate from me, not going to leave me,'” Alvarez-Jones told Newsy.

In response to a Newsy request, ICE said the agency is “in compliance with all federal court orders related to COVID-19” and following CDC guidelines.

There are more than 900 cases of COVID-19 across all ICE facilities as of July 16, according to an agency dashboard.

The agency has at least 124 kids in custody, according to Judge Gee’s original order in late June. If let out, they’d go to sponsors here in the U.S. as their families’ asylum case plays out.

Advocates say they want families to be released together.

“There’s no reason to be detaining these families where COVID is spreading rapidly,” said Alvarez-Jones. “I really hope that ICE kind of takes the high road now.”

The new deadline for the agency to release children is July 27.