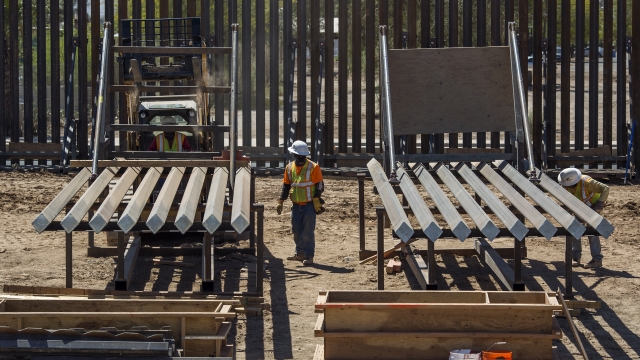 A federal judge denied a request from the House of Representatives to block the Trump administration from using Defense Department funds to build a wall along the U.S.-Mexico border.

In his opinion issued Monday, Judge Trevor McFadden said the Democratic-led House lacked legal standing in this case, writing, "While the Constitution bestows upon Members of the House many powers, it does not grant them standing to hale the Executive Branch into court claiming a dilution of Congress's legislative authority."

The House's lawsuit had to do with President Trump's national emergency declaration issued earlier this year. As part of it, the White House said it would use up to $6.1 billion from the Pentagon to help pay for a border wall.

That declaration gives the president access to that government funding without going through Congress. But the House's motion argued that the Trump administration's decision to divert funds violated the Appropriations Clause of the Constitution, which gives Congress the power to designate federal spending.

Since McFadden had already determined the court lacked jurisdiction to hear the case, he said he did not consider the lawsuit's merits when issuing his ruling.

He did note that his decision "does not imply that Congress may never sue the Executive to protect its powers." But in this case, McFadden found the House had not proven it needed the court to intervene as "a last resort" since  it instead has "several political arrows in its quiver" it could use to address disputes with the Trump administration.

A Justice Department spokesman praised the decision Monday. McFadden's ruling comes after a separate judge temporarily paused some of the funding the Trump administration was going to use to build sections of the border wall in New Mexico and Arizona.