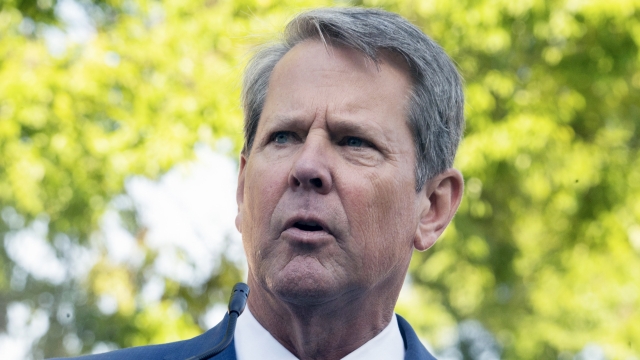 A judge ruled Monday that Georgia Gov. Brian Kemp must testify before a special grand jury that’s investigating possible illegal attempts by then-President Donald Trump and others to influence the 2020 election in the state — but not until after the November midterm election.

Lawyers for Kemp had argued that immunities related to his position as governor protect him from having to testify. But Fulton County Superior Court Judge Robert McBurney, who’s overseeing the special grand jury, disagreed and said the governor must appear before the panel. But he did agree to a request from Kemp's lawyers to delay that testimony until after the Nov. 8 election, in which the Republican governor faces a rematch with Democrat Stacey Abrams.

“The Governor is in the midst of a re-election campaign and this criminal grand jury investigation should not be used by the District Attorney, the Governor's opponent, or the Governor himself to influence the outcome of that election,” McBurney wrote. “The sound and prudent course is to let the election proceed without further litigation or other activity concerning the Governor's involvement in the special grand jury's work.”

But once the election is over, McBurney wrote that he expects Kemp's lawyers to “promptly make arrangements for his appearance.”

A delay could increase the likelihood that Trump will be a declared presidential candidate by the time the investigation moves toward its conclusion, further raising the political stakes. The investigation is one of several that could have serious legal consequences for the former president.

A statement from the governor's office says McBurney “acknowledged the potential political impact of the timing of these proceedings and correctly paused” Kemp's involvement until after the election. The governor plans to work with Willis' team and the judge "to ensure a full accounting of the Governor’s limited role in the issues being investigated is available to the special grand jury.”

Also Monday, McBurney declined to quash a subpoena for lawyer Kenneth Chesebro, who represented the Trump campaign. He’s scheduled to appear before the special grand jury on Tuesday, according to a court filing.

Willis opened the investigation early last year, prompted by a January 2021 phone call between Trump and Georgia Secretary of State Brad Raffensperger during which the then-president suggested the state’s top election official could “find” the votes needed to overturn his loss. But the investigation’s scope has widened considerably since then.

Raffensperger and some other state officials have already appeared before the special grand jury, which McBurney noted in his ruling.

Prosecutors have said they want to ask Kemp about Raffensperger's call with the then-president, as well as his own contacts with Trump and others in the wake of the 2020 general election.

Kemp's lawyers had argued he was protected by the principle of “sovereign immunity,” which says the state can’t be sued without its consent. But McBurney agreed with Willis' team that the protection isn't applicable because Kemp isn't being sued and is instead being called as a witness to provide facts for a criminal investigation.

Kemp's lawyers had also raised concerns about attorney-client privilege, and McBurney wrote that neither prosecutors nor grand jurors will be able to ask the governor about the contents of communications covered by that privilege. He said he’s aware of several conversations of interest to the investigation to which that privilege applies.

If there are disputes over what questions can be asked that cannot be resolved by the lawyers involved, they can be brought to McBurney “for resolution (or at least helpful direction),” the judge wrote.

McBurney's ruling Monday came after communications between Kemp's attorneys and Willis' team over when and how the governor would provide information for the investigation broke down. In a footnote of his ruling, the judge noted that correspondence between the two sides that was attached to court filings showed a “lack of civility among the attorneys involved.”

Chesebro had argued that any testimony about his representation of the Trump campaign would be protected by attorney-client privilege. McBurney found that while much of what Chesebro did for the campaign is protected by privilege, there are topics of interest to the investigation that aren’t off limits.

In a court filing seeking to compel his testimony, Willis wrote that Chesebro was “an attorney working with the Trump Campaign's legal efforts seeking to influence the results of the November 2020 election in Georgia and elsewhere.”

As part of those efforts, he worked with Republicans in Georgia in the weeks following the election at the direction of the Trump campaign, Willis wrote. That included working on the coordination and execution of a plan to have 16 Georgia Republicans sign a certificate declaring falsely that Trump had won the 2020 presidential election and declaring themselves the state’s “duly elected and qualified” electors even though President Joe Biden had won the state and a slate of Democratic electors was certified.