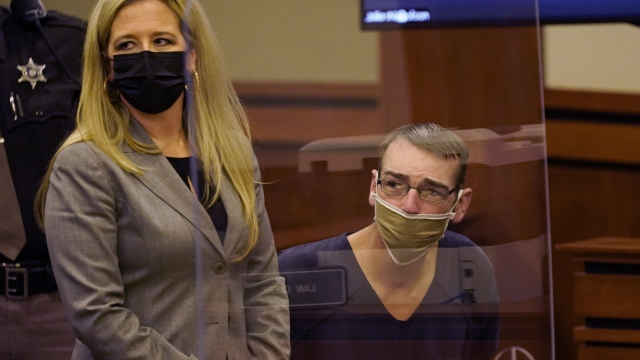 A judge on Tuesday granted a prosecutor more time to collect and share additional evidence against the parents of a boy charged with killing four students at Oxford High School, partly to give the Michigan community "time to heal" during the holiday season.

James and Jennifer Crumbley are charged with involuntary manslaughter. They're accused of giving their 15-year-old son access to a gun and failing to intervene when they were confronted with his disturbing drawings a few hours before the Nov. 30 shooting.

The teenager is separately charged as an adult with murder and other crimes.

Judge Julie Nicholson granted a request by prosecutors and defense lawyers to postpone until Feb. 8 a key hearing that will determine whether the parents will face a trial, instead of plowing ahead on Dec. 22.

"These funerals have just recently concluded," McDonald said. "The prosecutor's office has a lot of work to do with a lot of the victims and the families. We do not think it's in their best interest or in the interests of justice to do that during the holiday season."

Besides the deaths of four students, six students and one teacher were injured.

"We have police narratives, we have digital evidence, we have video evidence," the prosecutor later told reporters, adding that a delay in court proceedings would help her office prepare and also give Oxford "time to heal to the extent that's possible."

In court, the Crumbleys sat on the outside of their two lawyers. But when the lawyers got up to speak privately to the judge, James Crumbley mouthed "I love you" to his wife.

The parents were arrested on Dec. 4 hiding in a commercial building in Detroit, hours after charges were announced. They remain in jail, apparently unable to pay bonds of $500,000 each, though defense attorney Shannon Smith said she would ask for new terms on Jan. 7.

The shooting suspect had a brief court hearing Monday and will return on Jan. 7. His lawyer, too, needs more time to review evidence.

James and Jennifer Crumbley are accused of failing to step in on the day of the tragedy despite being confronted with a drawing and chilling message — "blood everywhere" — that was found at the boy's desk.

The Crumbleys committed "egregious" acts, from buying a gun on Black Friday and making it available to their son to resisting his removal from school, McDonald said.

Oxford High School, about 30 miles north of Detroit, has been closed since the shooting. Athletes began returning to competition Monday.

Other schools in the Oxford district were closed Tuesday out of "an abundance of caution" after an online threat was directed at a middle school, officials said. Online threats against Michigan schools have occurred since the shooting and led to closings elsewhere as well as charges.

Oxford will hold its first school board meeting Tuesday evening since the shooting.