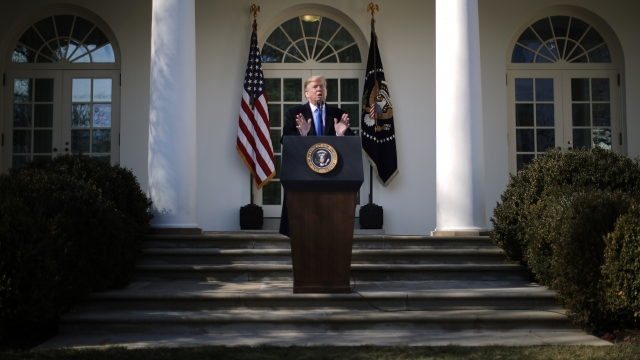 SMS
Judge Blocks Trump's Health Insurance Rule For Immigrants
By Alec Larson
By Alec Larson
November 3, 2019
A judge issued a temporary restraining order blocking a Trump administration policy, but the court still has to rule on the full merits of the case.
SHOW TRANSCRIPT

A federal judge in Oregon has issued a temporary restraining order against a Trump administration policy that would have required immigrants to prove they have health insurance before they can get visas. The rule would have gone into effect on Nov. 3.

President Donald Trump signed the proclamation in early October. It said immigrants would have to either prove that they have health insurance or that they have sufficient financial resources to cover health costs within 30 days of entering the country. The rule wouldn't affect eligibility for asylum or refugee status.

A group of U.S. citizens and a non-profit organization filed a lawsuit against that policy Wednesday, arguing it would block almost two-thirds of all potential legal immigrants. The lawsuit also said the rule would decrease — or even eliminate — the number of people immigrating using family-sponsored visas.

A senior litigator with the Justice Action Center, who argued on behalf of the plaintiffs on Saturday, said the group was "very grateful that the court recognized the need to block the health care ban immediately," but the fight will continue. The court still has to rule on the full merits of the case.