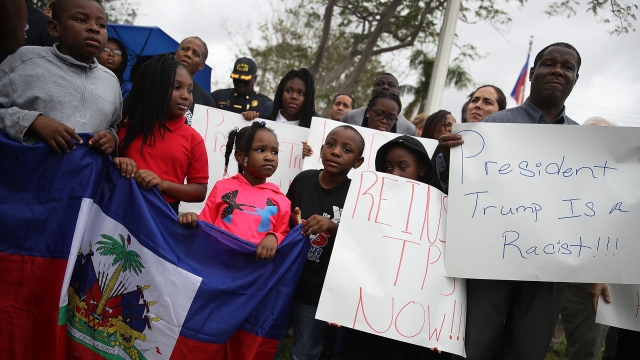 SMS
Federal Judge Rules Against Trump's Plan To Send Haitians Back Home
By Nnamdi Egwuonwu
By Nnamdi Egwuonwu
April 13, 2019
A New York district judge says there was enough evidence to believe the change in policy could be discriminatory.
SHOW TRANSCRIPT

Two federal judges have now blocked the Department of Homeland Security from sending hundreds of thousands of immigrants back to their native countries.

The rulings stop the Trump administration's plans to dismantle the temporary protected status program. The program has allowed upwards of 300,000 immigrants from countries like Haiti and Nicaragua to stay in the U.S. in the event of a natural disaster or violence.

Haitian immigrants sued the Trump administration, with the judge saying the plaintiffs provided evidence that the change in policy was motivated by “a discriminatory purpose of removing non-white immigrants to the country.”

Back in October, a California judge made a similar ruling regarding the protected status of immigrants from Haiti, Nicaragua, Sudan and El Salvador. It gave the Trump administration no choice but to maintain the immigrants' protected status as the case moves through the courts.

The White House is expected to appeal the ruling, and a spokesperson for the Department of Homeland Security says it’s complying with the orders.