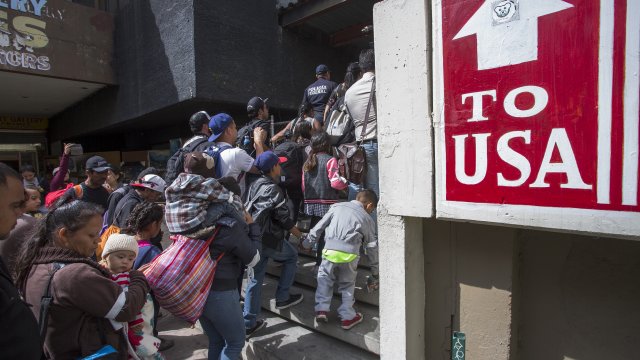 SMS
Judge Blocks Trump Administration Order Denying Asylum-Seekers Bail
By Briana Koeneman
By Briana Koeneman
July 3, 2019
The judge ruled that it's unconstitutional to deny some migrants a bail hearing while their asylum requests are being determined.
SHOW TRANSCRIPT

A federal judge in Seattle has blocked a Trump administration order that would've kept thousands of asylum seekers behind bars indefinitely as they wait for their cases to be complete.

On Tuesday, the judge ruled that it's unconstitutional to deny some migrants a bail hearing while their asylum requests are being determined.

And under a preliminary injunction, the judge said migrants must be granted a bond hearing within seven days of their asylum request or be released if they haven't gotten a hearing by that time.

The order was issued by Attorney General William Barr back in April. The decision reversed a 2005 immigration court ruling that said asylum-seekers who crossed into the U.S. illegally could be eligible to be released on bond while their proceedings played out — as long as they passed their interviews to determine they have a "credible fear" of returning to their home country.

As of early Wednesday, the Justice Department hadn't commented on the ruling. But the judge noted in her decision the government is likely to appeal it.