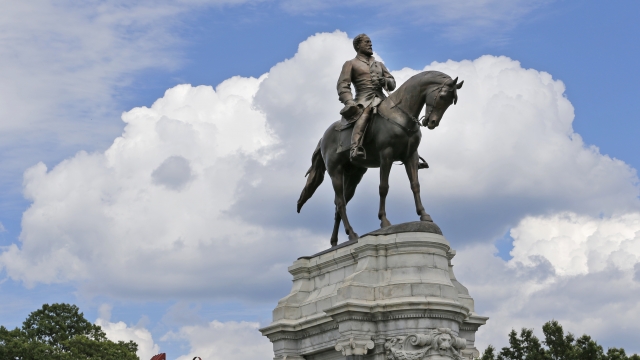 The injunction came days after Virginia Gov. Ralph Northam ordered the monument in Richmond be taken down "as soon as possible."

A Virginia judge has temporarily halted the removal of a statue of Confederate Gen. Robert E. Lee in Richmond.

The judge issued a temporary 10-day injunction Monday. It came days after Virginia Gov. Ralph Northam ordered the monument be taken down "as soon as possible," amid mass protests against racial injustice.

"But make no mistake — removing a symbol is important, but it's only a step," Northam said. "It doesn’t mean problems are solved. There are still monuments of inequities that exist in our commonwealth and in this country. We still need change in this country. We need healing."

A man named William Gregory wants the statue to remain where it is. In a lawsuit filed against Northam, Gregory argues the state of Virginia promised to "faithfully guard" and "affectionately protect" the statue when it annexed the land it sits on back in 1890.

The lawsuit reads in part, "[Gregory's] family has taken pride for 130 years in this statue resting upon land belonging to his family and transferred to the Commonwealth in consideration of the Commonwealth contractually guaranteeing to perpetually care for and protect the Lee Monument."

The judge said Monday that blocking the statue's removal until he can hear full arguments from both sides does "little harm" to the state.

A spokeswoman for Northam said he "remains committed" to removing the statue.