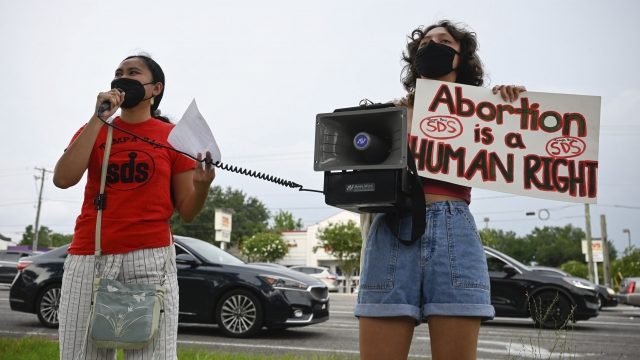 A Florida judge said Thursday that he will temporarily block a 15-week ban on abortions in his state, but his bench ruling won't take effect before the ban becomes law Friday — an issue that could cause confusion for patients as well as abortion providers.

The case in Florida reflects battles being waged in courts across the country after the Supreme Court said abortion was no longer protected under the federal constitution. The high court left it up to states to decide whether abortion is legal within their borders — forcing attorneys on both sides of the debate to turn to their state constitutions.

Some of the legal disputes involve trigger laws that were specifically designed to take effect if Roe were to fall. Some involve bans that have been on the books, unenforced, for generations. Others entail prohibitions on abortion that were held up pending the ruling on Roe and are now moving forward.

The legal wrangling is creating chaos for patients, including some in Kentucky who were turned away from clinics and rescheduled appointments in neighboring states. The owner of North Dakota's only abortion clinic — which is operating until July 28 — said one patient wrote on a form: "Will I be prosecuted for having an abortion today?"

In Florida, Judge John C. Cooper said Thursday that he will temporarily block the 15-week abortion ban from taking effect after reproductive health providers argued the state constitution guarantees a right to the procedure. Cooper said Florida's ban was "unconstitutional in that it violates the privacy provision of the Florida Constitution."

Cooper's decision, issued from the bench, will not be binding until he signs a written order — which appeared would not happen before Tuesday. That means the 15-week ban will take effect Friday, as scheduled, and the gap in timing raises questions about whether some patients will be affected. Florida's current law allows abortion up to 24 weeks.

Laura Goodhue, executive director of the Florida Alliance of Planned Parenthood Affiliates, said clinics were still seeing patients and would operate under the law but the situation was challenging for doctors.

"It's a lot of unnecessary delays and patients are at the whims of the legal system right now," she said.

The back-and-forth court activity has caused confusion in other states as well.

The Texas attorney general filed an emergency appeal Thursday with the state Supreme Court, after a lower-court judge temporarily blocked enforcement of a decades-old law banning virtually all abortions. Texas Attorney General Ken Paxton said the old law prohibiting abortions unless necessary to save the life of the mother remains on the books.

Texas already bans most abortions after about six weeks — before many women know they are pregnant — with no exception in cases of rape or incest. A separate trigger law that would prohibit virtually all abortions in the state is set to take effect in coming months.

In Louisiana, where an abortion ban is temporarily blocked, doctors at a clinic in New Orleans were performing procedures Thursday — in spite of a letter from the attorney general that warned providers could lose their "liberty and medical license," said Amy Irvin, a spokeswoman for Women's Health Care Center.

And in West Virginia, Gov. Jim Justice said Thursday that he will call a special legislative session to address the abortion law there. West Virginia bans abortions after 20 weeks, but the state also has a law dating to the mid-1800s that calls for anyone seeking an abortion to be charged with a felony punishable by up to 10 years in prison. The local chapter of the American Civil Liberties Union is challenging it.

Reproductive health providers challenged the Florida law based on a 1980 state constitutional amendment guaranteeing a broad right to privacy, which has been interpreted by the state Supreme Court to include abortion. The state said the right to privacy doesn't include abortion rights, arguing that the state has an interest in safeguarding health and protecting potential life.

In a statement, DeSantis said the Florida Supreme Court previously misinterpreted Florida's right to privacy "because the Florida Constitution does not include – and has never included – a right to kill an innocent unborn child."

Elsewhere, the owner of North Dakota's only abortion clinic said she is working in an unpredictable environment. Tammi Kromenaker, owner and operator of Red River Women's Clinic in Fargo, said her clinic is still providing procedures but was told it must stop by July 28. Then, she'll move the clinic across state lines to neighboring Moorhead, Minnesota.

"The most important thing I need to get out is that we are still here, we are still seeing patients," Kromenaker said. "Patients shouldn't be facing these fears and confusion just for what used to be constitutionally protected medical care."