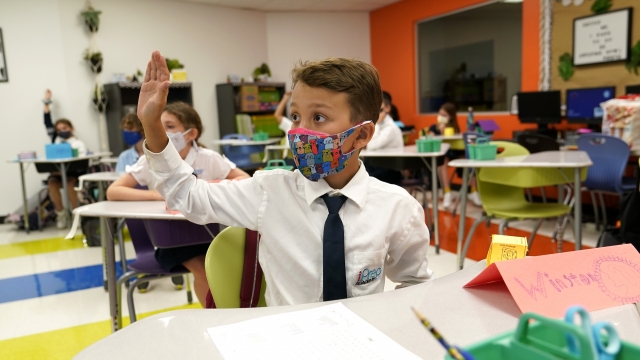 While the latest COVID-19 surge took hold in Florida, some of the biggest school districts defied state leaders with stricter mask mandates, as some parents took the issue to court.

Thursday, a judge formally signed an order blocking Florida's mask rules that allow parents to opt out of school mandates and explaining the law doesn't allow defendants to punish school boards for adopting mask mandates without parental opt outs if school boards were denied their due process rights.

The order states: "The 'Enjoined Defendants' are ordered not to violate the Parents' Bill of Rights by taking action to effect a blanket ban on face mask mandates by local school boards and by denying school boards their due process rights granted by the statute which permits them to demonstrate the reasonableness of the mandate and the other factors stated in the law."

"I think that the practice itself is at a very minimum contrary to the spirit of the ruling but more likely contrary to the actual ruling," said Charles Gallagher, an attorney for the plaintiffs in the case.

Governor Ron DeSantis continued pointing to his position that the decision should be left to parents.

"I do think you'll see the board of education in the meantime discipline the politicians similar to what they did in Alachua and really do that. What I've said is look it's not the kids fault it's not the teachers fault on any of this it's really more of a political dispute so they're gonna focus I think on what they're doing on the politicians," state Florida Governor Ron DeSantis stated ahead of the orders publication.

Ahead of the orders signing, a spokesperson for the Florida Department of Education stated they would 'follow the rule of law until such a time as the court issues its ruling,' and planned to immediately appeal.

"As far as I am aware, a signed written order has not been issued. At this point, we will continue to act with urgency to protect the rights of parents and students. We will not let up, and we will not stop holding elected school board members who refuse to follow the law accountable," stated the spokesperson.

School districts in Hillsborough, Sarasota, Orange, Palm Beach County, Indiana River and Miami-Dade Counties maintained they were in compliance. Some already cited the court case and pointed to the impact of COVID on their districts. Hillsborough County noted positivity, quarantines and isolations decreased since implementing its mask rules.

"Our board recognizes that taking these actions may bring about consequences," said the superintendent of Miami-Dade County Public Schools, Alberto Carvalho.

"We stand by this is a small price to pay to ensure the health and well being of our students and the workforce that teaches them and protects them."

Thursday evening, Gallagher confirmed the state filed a notice to appeal. He filed emergency motion to vacate the stay in response the same night.