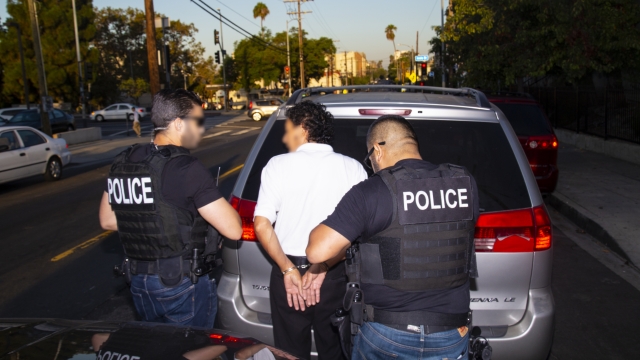 SMS
Judge Blocks Expansion Of Expedited Deportations
By LeeAnne Lowry
By LeeAnne Lowry
September 29, 2019
Officials had said the new rule would ease the increasing backlog in the immigration system, but the judge said harm to immigrants wasn't considered.
SHOW TRANSCRIPT

A federal judge has blocked a Trump administration policy that would allow immigration officers to arrest and deport certain undocumented immigrants without a hearing.

Department of Homeland Security officials had said the new rule would ease the ever-increasing backlog in the immigration system, but the judge said the agency hadn't considered what harm immigrants would endure. She wrote, "An agency cannot consider only the perceived shiny bright spots of a policy that it is mulling — the silver lining, if you will.”

The judge also said the department didn't follow proper rule-making procedures. Federal law requires government agencies to post rule proposals in the Federal Register and allow the public to comment for at least 30 days before the rule can be enacted. Agencies can skip that comment period, but only in situations that don't affect the public, or where the comment period would be unnecessary or "contrary to the public interest" — such as minor technical changes or public health emergencies.

The Department of Homeland Security did post the rule in the Federal Register, but claimed that it fell under the law that allows an agency to skip the comment period. The judge disagreed. She said there's no good reason why the agency wouldn't have complied with the required notice-and-comment procedure.