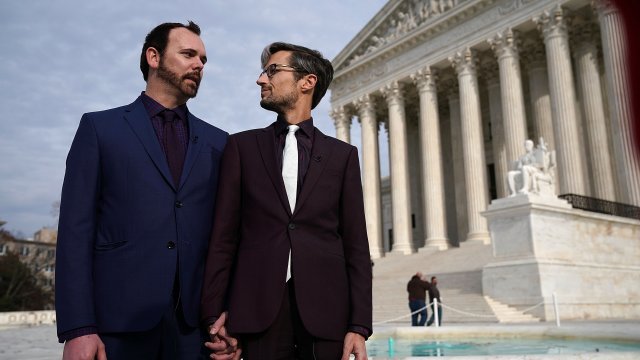 SMS
Judge: Baker Can Refuse To Create Wedding Cakes For Same-Sex Couples
By Gabrielle Ware
By Gabrielle Ware
February 7, 2018
The judge decided creating a cake is a form of "artistic expression," making it a First Amendment issue.
SHOW TRANSCRIPT

A judge ruled a California baker did not violate state anti-discrimination laws by refusing to bake a wedding cake for a same-sex couple due to her religious beliefs.

The ruling says Cathy Miller, the owner of Tastries Bakery, is a "creative artist" and that creating a cake is a form of "artistic expression." Therefore, forcing her to make a cake representing something that's against her beliefs violates her right to free speech.

This ruling could inform a similar Supreme Court case. A Colorado "cake artist" argued he should be allowed to refuse service to same-sex couples, and he also cited the First Amendment rights to freedom of speech and free exercise of religion.

Here's where it gets interesting: The judge in the California case said his ruling shouldn't be used as a blanket precedent for all other cases. He said that, for example, a tire shop couldn't refuse service on the basis of a customer's sexual orientation because "there is nothing sacred or expressive about a tire."

He also said if a cake were already baked and publicly displayed, it would be discriminatory not to sell it to someone based on their race, religion, gender or gender identity because the state bans discrimination in public accommodations.