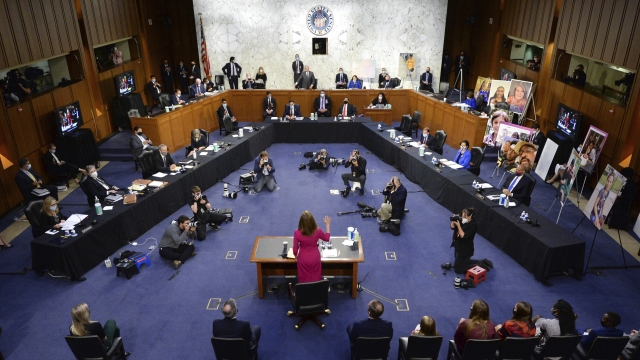 Judge Amy Coney Barrett — explaining her judicial philosophy to the Senate Judiciary Committee and to Americans — on the first day of her Supreme Court confirmation hearings.

"Courts are not designed to solve every problem or right every wrong in our public life," Barrett said. "The policy decisions and value judgements of government must be made by the political branches elected by and accountable to the people. The public should not expect courts to do so, and courts should not try."

A notion dismissed as hypocrisy by Democrats... citing the GOP's refusal to hold hearings for President Obama nominee Merrick Garland in 2016.

"I think this hearing is a sham," Democratic Sen. Amy Klobuchar said. "I think it shows real messed up priorities from the Republican party."

When it came to policy, Democrats drilled down on one specific issue — the future of the Affordable Care Act —  over and over again.

The Supreme Court is set to hear arguments on the Affordable Care Act  on November 10th — a decision that could change the future of health care in this country. Barrett previously criticized Chief Justice John Roberts' decision on the most recent Obamacare ruling — saying the Court "pushed the Affordable Care Act beyond its plausible meaning to save the statute."

"They are trying to get a justice on to the court in time to ensure they can strip away the protections of the affordable care act," said Democratic Sen. Kamala Harris. "And if they succeed, it will result in millions of people losing access to health care at the worst possible time, in the middle of a pandemic."

Republicans — pushing back, calling Judge Barrett more than qualified to become a Supreme Court justice. Among them, Senator Mike Lee, who took off his mask despite testing positive for COVID less than two weeks ago.

"If you were to look at any of the countless posters put up in here you’d think that this was a political discussion, policy discussion, legislative discussion," Lee said. "You in fact are not being reviewed for a legislative position or a policymaking position. You’re being reviewed for a position on our nation’s highest court where you’ll be asked from time to time to decide cases based on the law, based on the facts."