JPP's Standoff With The Giants Is A $14.8M Gamble 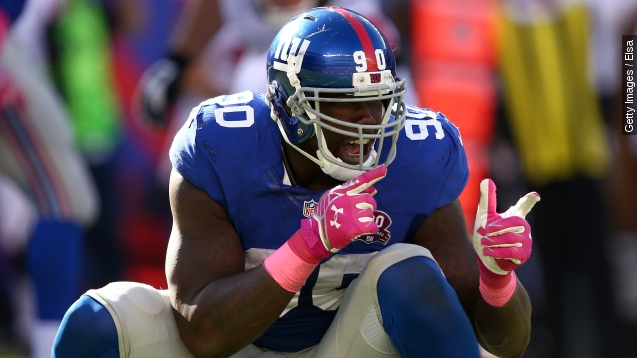 SMS
JPP's Standoff With The Giants Is A $14.8M Gamble
By Carter Woodiel
By Carter Woodiel
September 21, 2015
Jason Pierre-Paul doesn't want his injured hand to cost him his salary. And if he can't get a guarantee, things seem bound to get messy.
SHOW TRANSCRIPT

It's been two and a half months since Giants defensive end Jason Pierre-Paul lost his index finger in a Fourth of July fireworks accident, but he thinks he’ll be ready to play soon.

The team isn't so sure, and unless the two parties work things out, the next step could be a trip to an independent doctor and, possibly, a grievance filed with the NFL.

The difference of opinion isn’t surprising. Before his injury, the Giants offered Pierre-Paul a franchise tender that, if he signs it, will pay him nearly $900,000 per week. (Video via ESPN)

That's a lot of money, and Pierre-Paul wants to make sure he gets it. So he isn't signing the deal.

You see, if he signs the tender, the Giants could potentially put him on the Non-Football Injury List and could revoke his pay for any games he misses. He wants a guarantee that won't happen.

Pierre-Paul has stayed pretty quiet throughout the ordeal but, judging by a couple of social media posts, he doesn't think his injury is too big a deal. (Video via CBS Sports)

On Tuesday, JPP posted a video to Instagram of him working out, with his cast-free right hand visible.

And two days later, he tweeted, “I can’t think of the last time my index finger got me a sack.”

Some commentators aren’t so sure his injury is that negligible, though, like ESPN’s Tedy Bruschi.

That doesn’t mean playing with a compromised hand is impossible.

Plenty of players have protected their hands with clubs when coming back from an injury.

If Pierre-Paul does get approved to play by an independent doctor, he could potentially force the Giants to take him back. As it stands now, he's not under contract, but he probably won't be setting his sights anywhere else if the tender is still on the table.