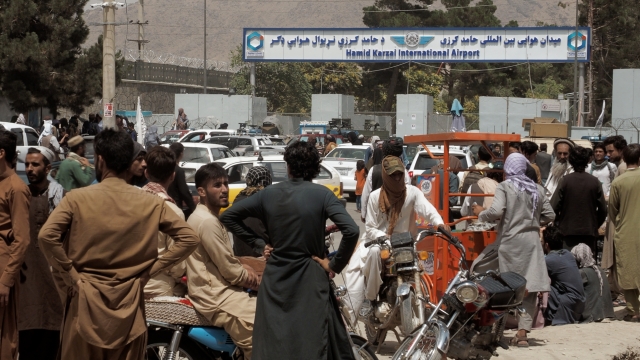 SMS
Photojournalist Describes Chaotic Journey From Kandahar To Kabul
By Meg Hilling
By Meg Hilling
August 20, 2021
A photographer told Newsy about his rocky path from Kandahar to Kabul while covering the Taliban's takeover of Afghanistan.
SHOW TRANSCRIPT

"In desperation to get out of the country, they feel that if they get there, they are going to be able to convince or somehow get into the airport and eventually be able to be evacuated," Juan Carlos, a photographer, said.

This Newsy exclusive video you are seeing right now is of the chaotic scene unfolding at the gates of the Kabul airport in Afghanistan. The voice you are hearing: freelance photographer Juan Carlos, whose 280-mile journey, 9-hour drive over broken roads and rugged terrain from Kandahar to Kabul was a harrowing one.

"A lot of people that are there as well, are people that don't have the right paperwork in order to be able to be evacuated," Juan Carlos said.

Speaking from Kabul, Juan Carlos says his journey to cover the Taliban's takeover of Afghanistan has been unlike anything he has ever experienced.

"I expected this, or for the city to be in this situation within a week. But literally within 72 hours, the city was taken over," Juan Carlos said.

While in Kandahar, he watched as Afghanistan's second-largest city fell to the Taliban last week. Trapped in a hotel room there, Juan Carlos says he knew he had to get to Kabul, their final target. The question was how.

"The situation was that there were no flights, and there are still no flights out of Kandahar," Juan Carlos said. "On Sunday, the spokesperson for the Taliban in Kandahar gave a press conference where they talked about their position and how the Taliban was going to treat the press."

A fixer he had hired to help him navigate the war conditions pulled him aside to introduce him to a Taliban spokesman.

"He was very polite. He said that, you know, they were glad foreign press was there to see what was happening and able to report on how the Taliban was handling things and how the new government was dealing with the with the city."

Juan Carlos says the Taliban spokesperson gave him a document.

"He actually gave me a little written letter on a piece of paper that states, in a way, I guess, that I’m press, a guest of the Taliban or the Islamic Emirate, and I can do my work without having any issues," Juan Carlos said.

With paper in hand, Juan Carlos and his fixer negotiated a ride with the Taliban's caravan into Kabul for the next morning. But when that caravan left earlier than planned, Juan Carlos says he, his fixer, another journalist and two other men made the tough decision to drive to Kabul on their own.

"The highway from Kandahar to Kabul is one of the worst highways, roads that I've ever driven on," Juan Carlos said. "Potholes everywher. There's areas that are completely destroyed. It's incredible."

"I was told that, even by the Taliban, that there might be some IEDs in the road. So that was kind of in my mind,” Juan Carlos said. "The other concern was, yes, the checkpoints, like, what would those be like, you know, to get to checkpoints, being foreigners, Americans."

"Interestingly enough, the fixer would always say, we are press and we also have permission from the Taliban," Juan Carlos said. "Pretty much it was a smooth ride. We got stopped, I think, two or three times, very quickly, no issues."

Since arriving in Kabul, Juan Carlos says the airport has been the center of the chaos.  He estimates roughly 1,000 people a day crowd desperately at the gates, only to be met by Taliban fighters who try to turn them away.

"The practice that they are using, you know, is shooting up in the air constantly. Live bullets. So these are not rubber bullets or anything. Live bullets, constantly. They do it close to the crowds so they can scare them away. Once again, they are chasing them, beat them. They brought in a fire truck and started using a water cannon on them," Juan Carlos said.

While filming at the airport, Juan Carlos says he has been met with mixed reactions from Taliban fighters.

"The Taliban is not one whole group, right? It is made up of different groups. And also, you have different types of fighters. You have the kind of, like, the younger generation or newer generation of fighters, and you have older fighters that have been fighting for decades, for years. The younger generation, they're more open and friendly. If they see that I have the letter, they're OK with it, you know. They allow me to do my job, no problem."

He says the hardest encounters have been with the Afghan people trying to escape.