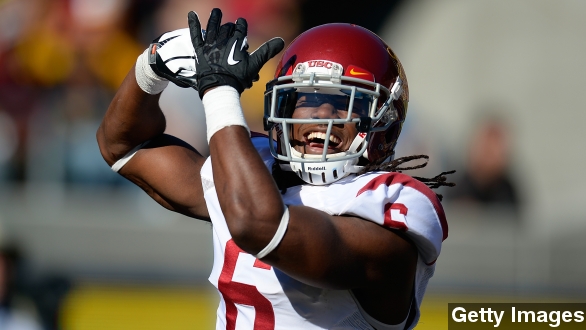 University of Southern California defensive back Josh Shaw hurt his ankles over the weekend.

And that's about all we know after Shaw admitted Wednesday the balcony jump, the painful landing and the daring rescue of his drowning 7-year-old nephew was all a hoax.

Shaw released a statement through his attorney saying, "On Saturday ... I injured myself in a fall. I made up a story about this fall that was untrue. I was wrong to not tell the truth. I apologize to USC for this action on my part."

Another statement posted on the university's website says an apologetic Shaw made the admission to the athletic department earlier in the day. Head coach Steve Sarkisian said, "Although this type of behavior is out of character for Josh, it is unacceptable. ... I believe Josh will learn from this. I hope that he will not be defined by this incident, and that the Trojan Family will accept his apology and support him."

The story, first reported by the university, was too feel-good not to pick up with some outlets praising Shaw for his heroism when the story was published Monday.

But by Tuesday, others began to cast doubt. Sarkisian admitted to hearing contradictory reports, but still vouched for Shaw's character.

And commentators who previously sung his praises had a different tone once doubt about Shaw's story set in: "Today, before a statue of the young man could be built, or a call from the president placed, USC said they had received several calls questioning the authenticity of Josh Shaw's story."

We still don't know what happened, but we do know Shaw has retained prominent criminal defense attorney Donald Etra. We should point out Shaw isn't currently facing any criminal charges and Etra told USA Today, "There is no criminal aspect to this whatsoever."

Shaw has been suspended indefinitely as the university continues to investigate the incident.