Josh Hamilton's Return To Texas Is A Deal For Both Sides 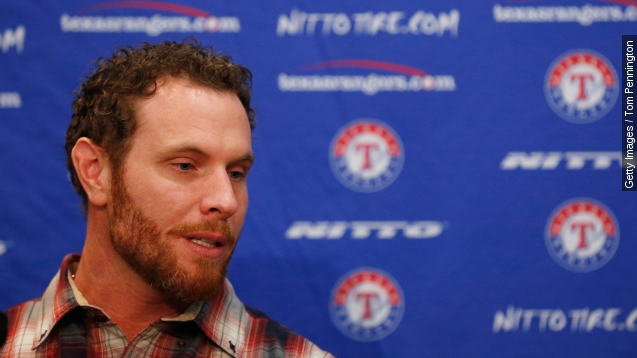 SMS
Josh Hamilton's Return To Texas Is A Deal For Both Sides
By Matt Moreno
By Matt Moreno
May 25, 2015
Hamilton was traded from the Angels to the Rangers in April after a self-reported cocaine and alcohol relapse.
SHOW TRANSCRIPT

Josh Hamilton is back in a Texas Rangers uniform, and it’s been quite the trip to get back there. The 34-year-old will be back in the lineup Monday after shoulder surgery in the offseason.

Hamilton first played with the Rangers from 2008 to 2012 where he enjoyed a 43 home run season, a 130 RBI season and a .359 batting average for a season — all career highs. (Video via Playstation)

But his move to L.A. for the 2013 season was less than favorable. While he was making about $25 million a year, his performance on the field didn’t reflect that. Over two seasons, Hamilton hit a combined .255 with 31 home runs and 123 RBI.

Underperforming after signing a $125 million deal is one way to fall into an unfavorable light with your organization, but Hamilton’s self-reported drug/alcohol relapse this offseason tumbled him further.

Far enough away that the Angels fought a bitter fight with him and Major League Baseball to suspend him and eventually ate most of his contract when trading him to the Rangers in April. (Video via KDFW)

But now the power-hitting left fielder is in what appears to be a better situation. The Rangers want him and he wants to be with the Rangers.

"I'm back home. It feels good to be back here in Arlington," Hamilton told reporters at a press conference in April.

And he'll get a chance to contribute immediately. The Dallas Morning News reports Hamilton will work his way into the lineup alongside the team's three other solid outfielders and likely hit fifth.

Hamilton is also joining a Rangers team where he doesn't have to be the star. An offensive surge lead by first baseman Prince Fielder has the Rangers leading MLB in runs for the month of May.

While Hamilton's a bit older now than his last stint in Arlington, the Rangers are paying him next to nothing. The risk on their end is minimal for a player with big potential. Hamilton will have a chance to face his former team, the Angels, in July.