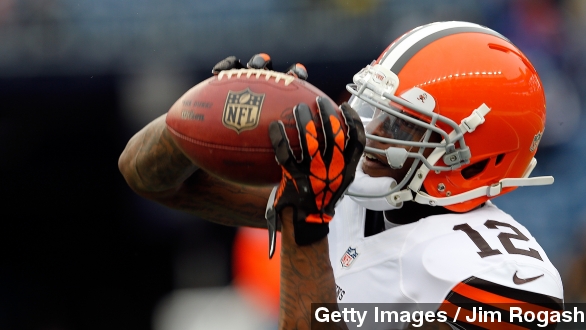 By Adam Falk
September 4, 2014
During his suspension from the NFL this season, Josh Gordon will be selling cars and leading community efforts for an Ohio auto group.
SHOW TRANSCRIPT

A post from ESPN's Josina Anderson Thursday confirmed Gordon will be the "goodwill ambassador" for an auto group in Randolph, Ohio. "He will be working in all aspects of their car business including as an on-floor salesman."

Yep, the Pro Bowl wide receiver is scheduled to start selling this weekend. BlackSportsOnline writes, "If Drake can work for the Raptors, I don't see why Josh Gordon can't sell a few cars."

Gordon is currently suspended from the NFL after league officials said he violated the NFL's substance abuse policy.

So here we are. But Gordon is in good company — a number of athletes have picked up an extra day job here and there.

BLAKE GRIFFIN: "Yeah, man. I know how to work it."

That's Blake Griffin working on his comedy as a pseudo-intern for Funny or Die during the NBA lockout.

STEVE HARVEY ON "FAMILY FEUD": "It's the Paul family."

And his future teammate Chris Paul stayed active too, appearing on "Family Feud."

Hines Ward traded cleats for dancing shoes just before the 2011 NFL lockout, but – wait for it – there's the Terrible Towel.

Although it probably doesn't compare to his Super Bowl rings, Ward and his partner Kym Johnson did win "Dancing With the Stars."

Ron Artest, however, did not. He was the first to go. "I want to get to a point where my dance steps feel so comfortable that I can sizzle them, you know."

But that seems reasonable when compared to what Artest did his rookie season with the Chicago Bulls.

Bleacher Report says, "Artest applied for a job at Circuit City in an attempt to take advantage of the employee discount."

Probably on something that looked a little like this.

Some athletes just can't separate themselves from sports, though. Take, for example, Chad Ochocinco.

During the recent NFL lockout, he worked on his foot-game, trying out for MLS team Sporting KC. "Trying" is the key word.

INTERVIEWER: "So would you play for free?"

And let's not forget about Michael Jordan. Actually, we take that back. His baseball career was kind of forgettable.

Along with his car salesman duties, Gordon will also head the auto group's community efforts, including helping with the Wounded Warrior Project.