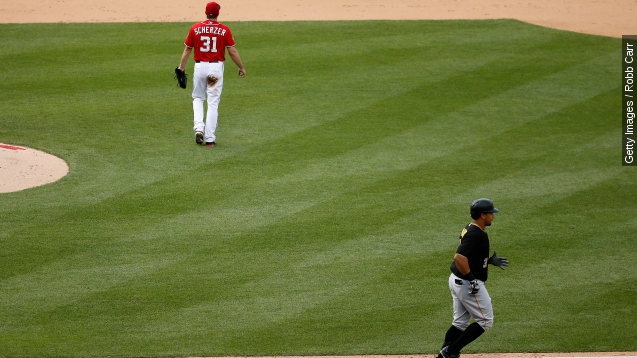 Don't sit and watch your home run. Don't cut through the pitchers mound. Don't steal a base when you're way ahead. And you definitely don't bunt or lean into a pitch to break up a perfect game.

Pittsburgh Pirates outfielder Jose Tabata is being accused of that last one after a two-out, 9th inning hit-by-pitch broke up Nationals pitcher Max Scherzer's perfect game. The pitch was a bit inside and bounced off Tabata's elbow.

Scherzer still got the no-hitter, but many were upset at Tabata's seemingly deliberate actions, feeling the pitch should've been called a ball.

"It's just one of those things that happened. ... Just stay focused on what you can do next, move onto the next hitter and just go right after [Josh] Harrison. Do everything you can do." (Video via Comcast SportsNet)

Tabata described the pitch to the Pittsburgh Tribune-Review after the game:

"I'm waiting for the slider to break in the middle, but the slider, it stay right there. ... That's why it got me."

While fans may have been unhappy with Tabata's inability to get out of the way of the pitch right after it happened, many media members later voiced support for him.

"That was a really tricky call. i think sometimes when you haven't gotten a runner on base, you gotta do whatever it takes to get on. I've seen that play happen many, many times," ESPN Tim Kurkjian said.

Scherzer's given up just one hit in his previous two games, with 26 strikeouts in the two shutouts. His next projected start is against the Philadelphia Phillies on Friday.