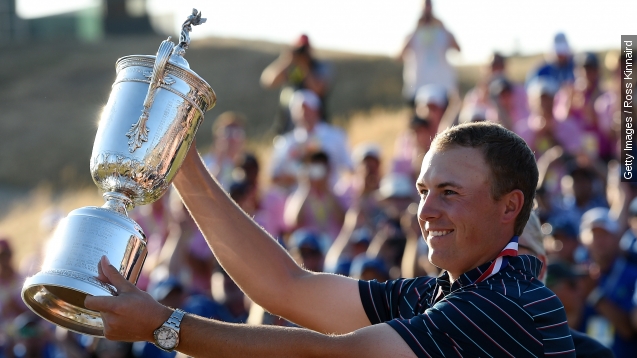 Jordan Spieth won the 2015 U.S. Open Sunday, becoming the 6th golfer ever to win both the Open and the Masters in the same year.

Oh yeah, and did we mention he's only 21 years old?

"Jordan has the world in the palm of his hands." (Video via SuperStroke Golf)

We'd say so! And his championship win Sunday was entertaining, to say the least.

Just moments before he birdied his final hole to secure the win, competitor Dustin Johnson missed a key putt that would have forced a playoff. And the rest is history.

The big victory gives Spieth two back-to-back championships and a couple of big paychecks to go with them. He scored $1.8 million at both the Open and the Masters, bringing his career earnings to more than $15 million.

Oh, and did we mention he's the youngest golfer to win the Open since Bob Jones in 1923 ...

And the first to win the Masters and the U.S. open in the same year since the legendary Tiger Woods back in 2002? Pretty impressive. (Video via Nike)

But if all goes according to plan, Spieth isn't done making history just yet.

With two legs of the Grand Slam under his belt, Spieth will look to snag his third major win in the British Open next month. Sunday's win was his 5th in the last 18 starts worldwide. (Video via CBS)