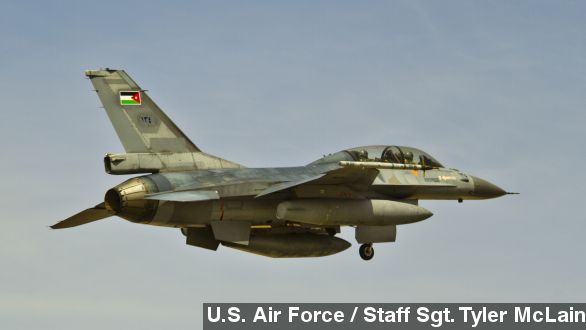 Raqqa, which is considered the de facto ISIS capital in Syria, has been subject to airstrikes from both U.S.-led coalition members and Syria's own government.

The airstrikes come hours after Jordan's king cut short a trip to the United States and returned home Wednesday.

Upon his return, Abdullah vowed Jordan would take "severe" action against against ISIS and said Al-Kasasbeh’s death would not be in vain. The first part of that retaliation came Wednesday, with the execution of two Al-Qaeda prisoners.

The next part now appears to have taken place Thursday with a new round of airstrikes.

Although Jordanians were at first wary of their nation taking part in coalition airstrikes against ISIS, Al-Kasasbeh being burned alive has garnered support for retaliation. (Video via France 24)

The surge in anti-ISIS sentiment within the kingdom shows that ISIS's apparent goal of turning Jordanian people against their own government has backfired.

With its elite counter-terrorism units, 1,300 tanks and 250 aircraft, National Journal's Kevin Baron says Jordan's promised retaliation is "the real Arab awakening the Pentagon has been waiting for."

Still, an Iraqi analyst told The Washington Post that the group may have gained more from releasing the video than it lost. The video shifts attention away from the group's setbacks in areas such as Kobani in northern Syria.