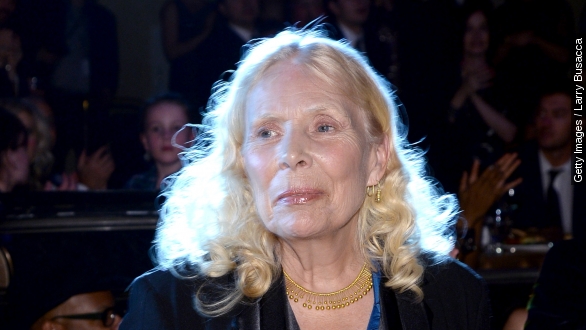 For the second time in nearly a month, conflicting reports are circulating about Joni Mitchell's health.

According to legal documents obtained by TMZ, the legendary singer is unconscious and unresponsive in a hospital. The outlet says her longtime friend, Leslie Morris, is hoping to be appointed Mitchell's conservator.

But just hours after that report surfaced, a statement posted to Mitchell's website denied rumors that she is in a coma. "Joni is still in the hospital — but she comprehends, she’s alert, and she has her full senses. A full recovery is expected."

The statement also clarified the legal document in question simply give Morris the authority to make care decisions for 71-year-old Mitchell once she leaves the hospital. (Video via CBC)

This latest news comes just weeks after the folk legend was taken to the hospital after reportedly being found unresponsive at her home March 31. (Video via Geffen Records / Joni Mitchell)

Though in the days following her hospitalization, messages posted to Mitchell's website and Twitter account insisted the singer was awake, on the mend and continuing to improve each day.

But the eight-time Grammy winner has opened up in the past about her battle with Morgellons disease, a serious skin condition that has left her unable to perform. (Video via PBS / "Tavis Smiley")

Mitchell told Billboard last year, "I can't fly without consequences at this point. ... And I'm sick on both ends for about 10 to 12 days. It's all that heavy metal in the air, and also viruses. My immune system is also very taxed."

Several media outlets, including the Los Angeles Times, reached out to a spokesperson for Mitchell, but no further comment on her current condition has been released.