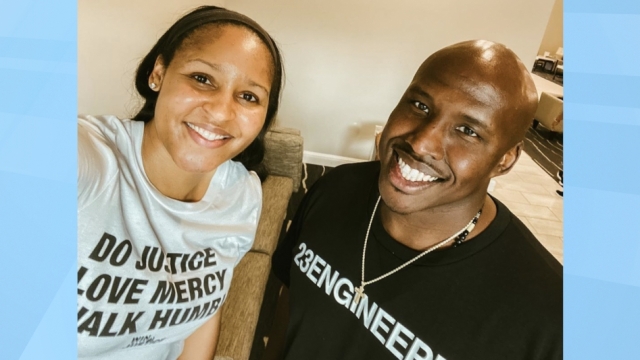 Jonathan Irons, a 40-year-old Black Missouri man, was released from prison on Wednesday after serving 22 years behind bars for crimes he says he didn't commit.

"I feel like I can live life now. I'm free, I'm blessed, I just want to live my life worthy of God's help and influence."

Irons was given a 50-year sentence in 1998 after being convicted on burglary and assault charges linked to a home invasion and the non-fatal shooting of a White man near St. Louis. Irons has maintained his innocence and said he was misidentified.

Last year, WNBA star Maya Moore put her career on hold to help Irons. The Jefferson City native met Irons through prison ministry at the Jefferson City Correctional Center, and the two became friends. In January, Moore said she was prepared to sit out a second season and miss the Tokyo Olympics in part to continue helping him.

But in March, a judge overturned Irons' convictions, citing a series of problems with the case. The New York Times says those issues include a fingerprint report that was never turned over to Irons' defense team. The judge said that would have given Irons "unassailable forensic evidence" to support his innocence.

"It was an unplanned moment where I just felt relief and just it was a kind of a worshipful moment, just dropping to my knees and just be so thankful that we made it."

The Missouri attorney general's office tried to appeal the judge's decision but was unsuccessful. The lead prosecutor in St. Charles County, where the home invasion and shooting took place, declined to retry Irons' case.

"We came to the conclusion that there were certain errors in the trial and certain things that if we were to retry him again, it would be nearly impossible to do so and uphold our own ethical standards."

Upon his release, Irons thanked everyone who had supported him, including Moore, and shared what's next.

"I'm absolutely, absolutely elated and thankful just to be here in this moment right now. When I get the time and opportunity and the resources and the provision, I want to be able to reach back and help other people. I want to I want to advocate for people who are less fortunate."