Boris Johnson Promises To Deliver Brexit — With Or Without A Deal 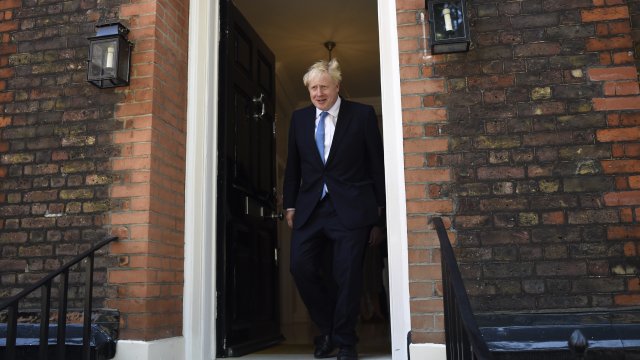 The United Kingdom has a new prime minister, but the same major issue lingering over its head: Brexit. Boris Johnson remained adamant the U.K. will leave the EU by the Oct. 31 deadline.

"We're going to get Brexit done on Oct. 31. We're going to take advantage of all the opportunities that it will bring in a new spirit of can-do," Johnson told the U.K.'s Conservative Party after he won its leadership election.

It's something his predecessor, Theresa May, failed to do. May failed to get her withdrawal agreement through the U.K.'s Parliament three different times, ultimately forcing her to step down.

Johnson has promised to renegotiate the deal with the EU so it gets that parliamentary support. There's a problem though: The EU may not budge. The EU's chief negotiator, Michel Barnier, told the BBC May's agreement in place "is the only way for an orderly Brexit." Soon after Johnson was named the conservative leader, Barnier said he is looking forward to "working constructively" with Johnson toward ratifying the withdrawal agreement.

If the two sides can't do that, then the U.K. will leave the EU in a "no-deal" Brexit. Johnson has repeatedly said that outcome is on the table so that the Brexit saga doesn't drag on.

Quick refresher: A "no-deal" Brexit is highly controversial. The U.K.-EU relationship would be unclear, affecting important areas such as the financial, agriculture and health sectors. That uncertainty, according to politicians and analysts, will mean severe economic consequences, including fears of a recession. Johnson and many of his Brexiteers have dismissed those claims, arguing Britain will still be better off.

There is another scenario on the table: Another Brexit deadline extension. New EU Commissioner Ursula von der Leyen said she is open to another delay if there is "good reason." However, she reiterated the EU will not renegotiate the terms of the withdrawal agreement. So now all eyes are on Johnson as he attempts to succeed where his predecessor could not: delivering a smooth Brexit by the Oct. 31 deadline.