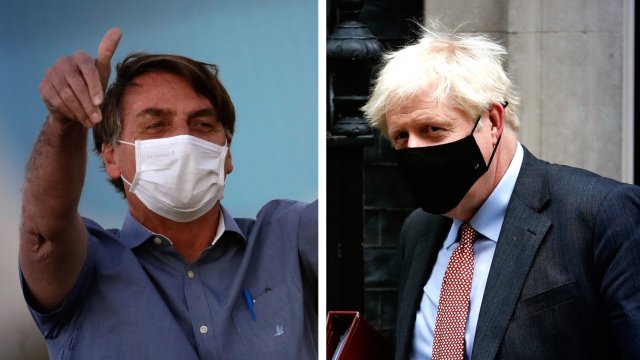 SMS
Johnson, Bolsonaro Offer Insights On How Trump May Deal With COVID-19
By Ben Schamisso
By Ben Schamisso
October 2, 2020
The contrasting ways the two foreign leaders fought the virus and coped politically may help us understand how things could play out here in the U.S.
SHOW TRANSCRIPT

President Trump has joined the growing rank of world leaders who have caught the coronavirus. Among them: Britain's prime minister Boris Johnson and Brazil's president Jair Bolsonaro.

The way these two leaders fought COVID-19 and coped politically may help us understand how things could play out here in the U.S.

"It had a huge effect on the way the British government worked because the whole apparatus of government depends so much on the prime minister's time," said John Rentoul, who is chief political commentator for The Independent, a British online newspaper.

Johnson got ill in March and told his nation he had mild symptoms. But soon after, his condition worsened to the point that he was hospitalized for a week, including three days in intensive care.

"He tried to continue to address the nation by video. But in those addresses, you could tell that he wasn't 100%. And there was a sense of drift at the heart of government as a result," Rentoul recalled.

Johnson deputized his duties to members of his cabinet during his hospitalization. No major decisions were taken during that time. After being released, he thanked Britain's National Health Service for saving his life and adopted a more somber tone about the pandemic.

"He was much more concerned to avoid the disease running out of control again," said Rentoul.

But unlike President Trump, Johnson never refuted the opinions of scientists.

"He was very reluctant to impose the lockdown, but he was very keen to follow the advice of the scientific advisers around it," said Rentoul.

Johnson spent two more weeks recovering at home and got a short-lived increase in approval ratings.

After Bolsonaro tested positive in July, he used his reportedly mild symptoms and swift recovery to further downplay the threat posed by the virus.

"He used his own infection to double down on his messaging using himself as a sort of proof that the virus is not as dangerous as scientists say," said Gustavo Ribeiro, founder and editor-in-chief of The Brazilian Report.

Experts say President Trump could use the same playbook to rally his supporters and boast his ability to beat the virus. But that depends on the seriousness of his case.

"He'll be able to present himself as some kind of superman who survived this disease, which will fit with what a lot of his supporters want to hear. Whereas obviously, if he's if he's laid low by it, I think that will cut against that narrative," Rantoul said.