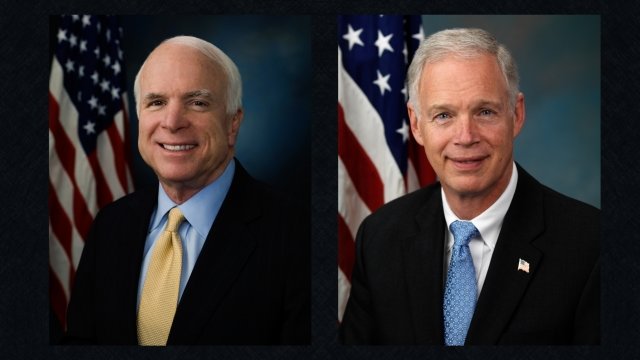 Sen. Ron Johnson is trying to distance himself from a controversial comment he made about Sen. John McCain.

"I'm not going to speak for John McCain — you know, he has a brain tumor right now. That vote occurred at 1:30 in the morning — some of that might have factored in," Johnson said on "Chicago's Morning Answer."

McCain and two other Republican senators joined all Democrats and independents in voting against the so-called skinny repeal bill July 28. Less than two weeks before that vote, McCain announced he was diagnosed with brain cancer.

A spokeswoman for McCain criticized Johnson, saying, "It is bizarre and deeply unfortunate that Senator Johnson would question the judgment of a colleague and friend."

A day after his radio interview, Johnson started trying to walk back his remarks. 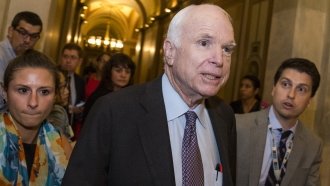 In a statement released to multiple media outlets Wednesday, Johnson said, "I'm disappointed I didn't more eloquently express my sympathy for what Sen. McCain is going through."

Then on CNN's morning show Thursday, the Republican senator from Wisconsin said he has "the deepest respect" for McCain. And Johnson told CNBC he was "just being sympathetic" and his comments got "completely misconstrued."

For his part, McCain said he voted against the Obamacare repeal because he didn't like the way it was being pushed through Congress.

"One of the reasons Obamacare failed was because it was rammed through the Senate without any Republican consideration. So, what did we do ... nine years later is do the same thing to the Democrats. That's not the way the Senate should function," McCain said Wednesday during a live town hall style discussion on Facebook.