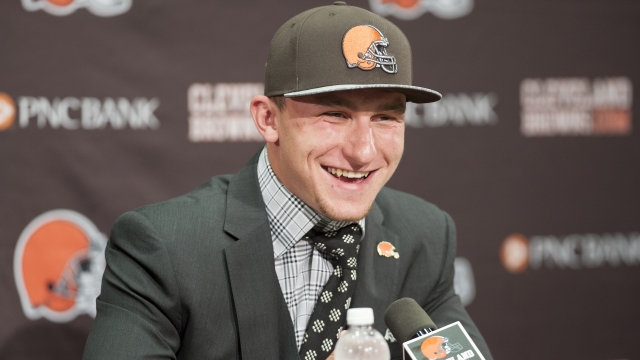 Johnny Manziel doesn't have a job in the NFL, and his offseason behavior likely won't convince any teams to sign him.

The controversial player commandeered a TMZ camera to say he'd been clubbing five or six nights in a row and he's rooming with the Denver Broncos' Von Miller.

But Miller went on Instagram and denied the claim, writing, "Johnny's not staying with me but he is my BROTHER!"

So, where is Manziel living? Anonymous sources told ESPN he shares an apartment with a different football player: his former Browns teammate Josh Gordon.

Why does it matter where Manziel is staying? If he’s actually living with Gordon instead of Miller, it could make NFL general managers leery about giving Manziel another chance to play professionally.

Gordon and Manziel are both talented football players who make more headlines for their behavior than their play. Gordon was an all-pro receiver, but he's pleaded guilty to a DWI and failed multiple drug tests.

After being suspended for the entire 2015 season, the NFL confirmed Gordon failed another test last month. If that's who Manziel is living with, that doesn't exactly line up with his assertion that he's "getting his life together, bro."

Even if he gets another job in the NFL, Manziel could also face a suspension under the league’s personal conduct policy for a January incident. His then-girlfriend told police Manziel hit her so hard it ruptured her eardrum.

And even if he escapes suspension, Manziel hasn't been the kind of player teams know they can rely on.

Manziel was disciplined for being late for practice and became well-known for his partying. He went to rehab in February for substance abuse but admitted in the TMZ video he's been going out a lot. When you add up all those incidents, it could make teams unwilling to sign Manziel.

Yahoo's Frank Schwab wrote NFL teams won't look favorably at this new video: "Manziel could use something positive to maybe get the ball rolling back toward reviving his NFL career. His claim about living with Miller wasn't it."

This video includes clips from ESPN, TMZ, WJW-TV and Champs Sports and images from Getty Images.

Correction: A previous version of this video provided insufficient attribution for incidents involving Johnny Manziel and Josh Gordon. This video has been updated.