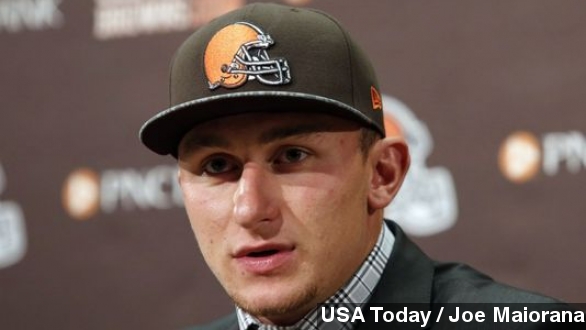 SMS
Johnny Manziel Hit With Bogus $25 Million Lawsuit
By Alexis Rogers
By Alexis Rogers
May 23, 2014
A person claiming to be a T.V. personality filed a bizzare complaint against Manziel, alleging he sexual harassed her.
SHOW TRANSCRIPT

​Cleveland Browns quarterback Johnny Manziel is back in the headlines again, this time for a sexual harassment lawsuit. But don’t worry folks, it’s not real.

The media seems like it can't get enough of Johnny Football, especially since the draft, and they called the lawsuit a hoax pretty early… and it’s not hard to see why.

Deadspin first got the tip of the salacious lawsuit which claims Manziel had been harassing a woman with nude photos and videos since Valentine’s Day of last year.

The person who filed the complaint used the name Samantha Schacher. (Via U.S. District Court, Middle District of Florida)

In real life, Samantha Schacher is a CNN contributor and a co-host on Dr. Drew. And get this: the address on the complaint was CNN’s headquarters in Atlanta. The real Schacher was quick to set the record straight. (Via HLN / "Dr.Drew On Call")

She told TMZ she found the claims “outrageous” and even “funny,” but she assured everyone "It's absolutely 100% bogus and a hoax."

According to WTAM, serial filer Jonathan Lee Riches was the one behind all of the madness, but no one has been able to confirm that yet.

Riches is infamous for trying to sue celebrities with bogus lawsuits. According to Charleston Daily Mail he has filed over 2600 lawsuits in federal district courts. We reported back in 2012 Riches was arrested for driving to Newtown Connecticut two days after the Sandy Hook massacre and posing as Adam Lanza's Uncle, Jonathan Lanza.

The document itself was pretty shabby: there are tons of spelling errors and laughable claims that we can’t mention. The clerk who received the document didn’t even bother to apply a stamp of approval.

University of Florida Law School professor Joseph Little told USA Today the person didn't even pay the required $400 fee to file. He added that there is not a requirement to show identification when you file for yourself.

Little also told USA Today that the complaint could be dismissed if it was filed under a fraudulent identity.