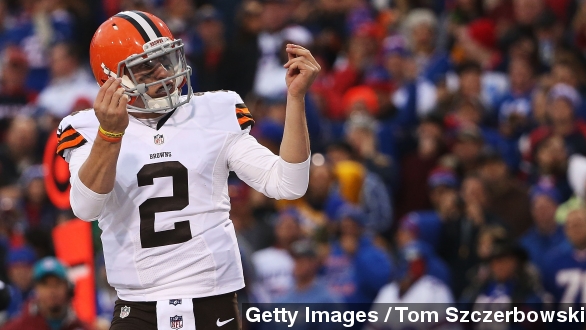 What was widely interpreted as a maturity problem for one of the NFL's most popular quarterbacks now appears to be something more serious.

"Oh, Cleveland Browns fans. You are not going to like this," CNN's Carol Costello said. "It concerns Johnny Manziel. Johnny Football. The big bust of a rookie last year ... entered a treatment program on Wednesday."

Mid-morning Monday, a Cleveland Browns beat reporter for The Plain Dealer tweeted a confirmation Johnny Manziel checked into rehab, according to his publicist.

According to a statement cited by several media sources, "Johnny knows there are areas in which he needs to improve in order to be a better family member, friend and teammate, and he thought the off-season was the right time to take this step."

Manziel's play on the field has been a big debate. Once college football's darling at Texas A&M University where he was the first freshman ever to win the Heisman Trophy, few analysts could agree if his scrambling, improvisational play would translate to the NFL.

But his off-the-field issues are well-documented, and he briefly saw a therapist while he was at A&M. Still, Manziel has clearly enjoyed his celebrity status.

Despite having no NFL experience, huge brands like Snickers and McDonald's signed him to endorsement deals before his rookie season. He appeared in the McDonald's commercial with friend LeBron James, by the way.

But after this video surfaced online of Manziel pretending a stack of money was a phone, the Browns told their first round pick to "tone it down."

But problems persisted. Manziel was photographed over the summer tightly rolling money in a Vegas bathroom, and he even admitted to partying too hard and oversleeping the day before the Browns' season finale.

Manziel's rookie season was forgettable. He rarely played — even on a team struggling with injuries at the quarterback position. When he did get on the field, he completed about half of only 35 passes and threw two interceptions. (Video via The Plain Dealer)

Manziel's publicist asked that his privacy be respected during his time in treatment. The Plain Dealer reports the Browns have said the team will "fully support" him.