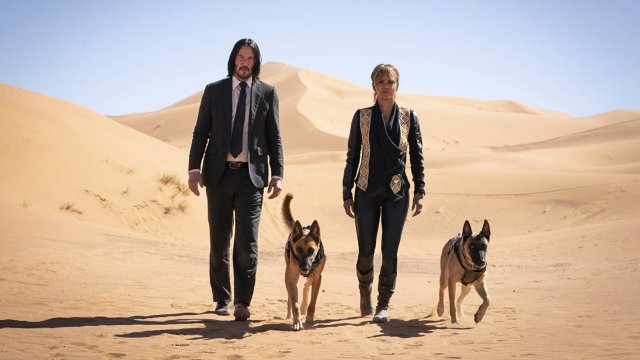 SMS
'John Wick 3' Exceeds Box Office Expectations And Topples 'Endgame'
By Jamal Andress
By Jamal Andress
May 20, 2019
The original 'John Wick' shot its way into theaters back in 2014 with a solid $14 million debut and the franchise has been on the rise ever since.
SHOW TRANSCRIPT

Finally kicking the Avengers off their box office pedestal is "John Wick: Chapter 3 — Parabellum" bringing in an estimated $57 million in its debut weekend. That's a better than expected opening weekend for this action franchise and one of Keanu Reeves personal bests.

The original "John Wick" shot its way into theaters back in 2014 with a solid $14 million debut and the franchise has been on the rise ever since.

"John Wick: Chapter 2" doubled those opening weekend numbers with a $30 million debut in 2017. Flash forward two years later and "John Wick" is at the top of the box office with a $57 million debut weekend.

Not only that but this is the second-best debut weekend of Keanu Reeves long box office career.

Only "The Matrix Reloaded" had a better first three days at the box office with a $91 million opening. Which just goes to show, action Keanu is the best Keanu.

Falling to No. 2 after three weeks at the top of the box office is "Avengers: Endgame" bringing in an estimated $29 million in its fourth weekend out. "Endgame" jumped another spot on the all time domestic box office list by passing up Avatar.

But it's still well behind "The Force Awakens" which racked up $936 million domestic box office dollars.

As for the grand prize, biggest box office earner worldwide, that "Avatar" has held for a decade now analysts say it's still too close to call. But if Marvel's greatest achievement on film can't topple the record we can assume it's safe for at least a little while.

And last but not least this week is "Pokemon Detective Pikachu" bringing in an estimated $24.8 million in its second weekend out.

As for next week, the Fresh Prince takes a break from Instagram do his full time job.