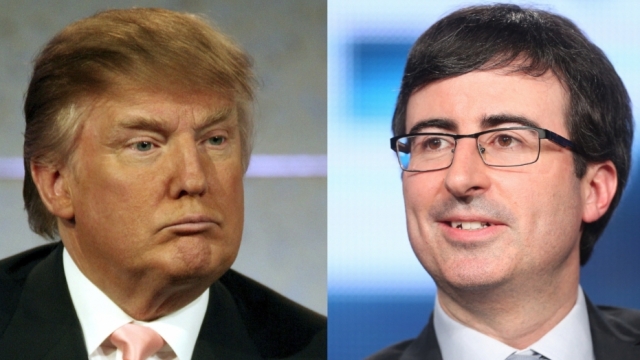 After holding his tongue on the subject for weeks now, John Oliver finally took on Donald Trump.

And the "Last Week Tonight" host definitely didn't hold back.

"Donald Trump is America's back mole. It may have seemed harmless a year ago, but now that it's gotten frighteningly bigger, it is no longer wise to ignore it," Oliver said on "Last Week Tonight."

During Sunday night's episode, Oliver also attempted to debunk the many claims Trump has made.

Like that one time the GOP front-runner said in a 2007 deposition, "My net worth fluctuates, and it goes up and down with markets and with attitudes and with feelings, even my own feeling."

"He always seems to be in the same mood: specifically, smug yet gassy," Oliver said.

The attack seemed to have been fueled in part by Trump's claim that he had been invited to appear on "Last Week Tonight," which he called "very boring" multiple times.

But, according to the program, Trump has never been asked to make an appearance. You know, because it's not a talk show.

Well, we're glad you were able to get all of that off your chest, John. And it only took about 22 brutal minutes.

This video includes clips from Donald J. Trump for President, Inc., and Fox News, and images from Getty Images.