John Kelly Denied Reports He Offered To Resign Amid Scrutiny 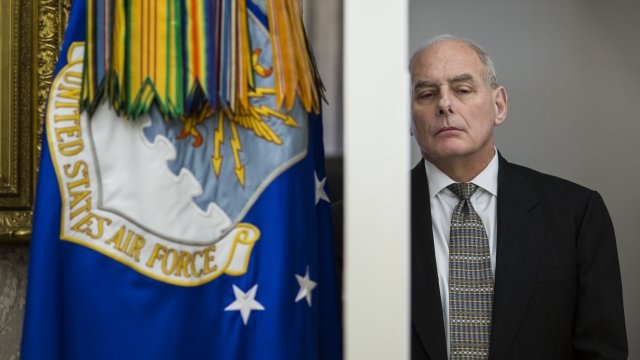 SMS
John Kelly Denied Reports He Offered To Resign Amid Scrutiny
By Jake Jones
By Jake Jones
February 9, 2018
Kelly is under fire for his handling of domestic abuse allegations against staff secretary Rob Porter.
SHOW TRANSCRIPT

There are currently conflicting reports as to whether or not White House chief of staff John Kelly will resign.

Kelly is facing public scrutiny and ire from President Donald Trump due to the handling of domestic abuse allegations against former staff secretary Rob Porter. Multiple news outlets are reporting their sources said Kelly had offered to resign and that the president was actively scouting for a replacement.

Kelly has caught heat before. And this isn't the first time we've seen reports about a possible West Wing reshuffle.

Both a White House spokesperson and Kelly himself denied he offered to resign. Sources told ABC News that Kelly wasn't on his way out right away.